Trading opportunities for currency pair:a pinbar has formed on the weekly. Taking into account that the COT report shows that big speculators have increased long positions, I’m counting on two price levels: 1.1320 and 1.1215. A break from 1.1320 will indicate market readiness to head for 1.1730. A fall to 1.1215 will see an increase of risks of a depart to the lower limit of the canal at 1.1120. After the pinbar the price could head straight down and a correction could start from 30 to 61.8% of the candle’s range. The scenario for a fall will be off the table it the weekly candle closes above 1.1615.

Due to expectations of a further rise in interest rates by the US Fed, the euro was expected to weaken against the dollar to 1.0957 by 10th - 11th April this year

The Fed didn’t hike their rate due to weak US stats and reassessed downwards the number of times the interest rate was to be risen this year. The euro strengthened on the back of a fall in European stock indices and a rise in producer prices throughout March in the Eurozone. The EUR/USD rate fell following the fall in commodity currencies after weak Chinese stats and the RBA’s decision to lower their interest rate by 0.25%.

A pinbar has formed on the weekly. This is a signal to sell euro. We can’t ignore this. Take a look at the graph below: I’ve marked out precious pinbars on it. In February 2015 the rate of the euro fell two weeks after the pinbar. In August 2015 the pair traded in a sideways for six weeks, before a new pinbar was formed in October 2015. After a six week flat, the rate fell for six weeks straight.

On Friday the euro bulls were able to close above 1.15 due to weak US labour market data. The unemployment level in the country throughout April remained at March’s 5%. Job creation in the non-agricultural sector of the economy rose by 160k against a forecasted 195k. March’s NFP was reassessed downwards to 208k from 215k.

The euro/dollar rose to 1.1479 and by trade close had returned to 1.1400. The price bounced from the upper limit of the channel. I don’t really get the reaction of traders to the report. However, I can say that they didn’t want to sell the dollar just yet. If the pinbar’s signal works, we can consider 1.1215 as a target level.

The increase in long positions is bringing about turmoil. In the group of big speculators, the number of covered positions was increased by 10,525 contracts. Covering is when a trader simultaneously holds short and long positions (a lock). The increase in this indicator says a lot about the uncertainty surrounding the euro/dollar. Traders could undo their locks at any moment and we would see a significant growth for either long or short positions. 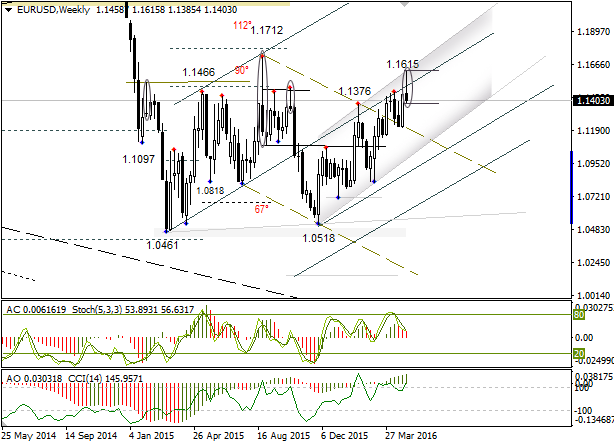