Trading opportunities for currency pair: the EUR/CAD has restored to the upper limit of the “1-1” channel. Since the NZD/CAD has broken through the trend line on the daily time-frame and the EUR/CAD and NZD/CAD have a positive correlation, it’s highly likely that it could shoot to 1.5077. The target is by the upper limit of the “2-2” channel and the R3 resistance at 1.5077. It’s better to buy from a roll back to 1.4605 and a close of the daily candle above the “1-1” channel. In the first case the risks will be significantly lower since a stop will be needed to be put below 1.4434 or as a minimum below the lower limit of the “2-2” channel at 1.4510. Growth will be cancelled out by a close of the daily candle below 1.4510.

The bull trend for oil was borne on 21st January from a $27.08 minimum. Over twenty weeks Brent rose 83.78% to $49.77 per barrel. Simultaneously, the downward trend on the cross differs massively in its wave structure. On slight correctional oil rebounds, the EUR/CAD restored more than oil cheapened. 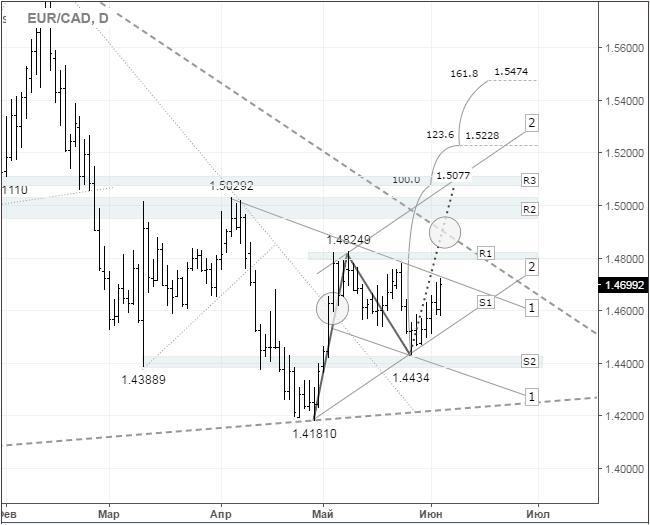 Whilst oil was rising between 10th and 26th May, the EUR/CAD formed a correctional pattern which looked flat (from a maximum of 1.4824 to a minimum of 1.4434). Using this formation we can make the “1-1” channel.

Over the seven days whilst oil was trading at around $49.62 in a sideways trend, the cross restored above the upper line of the “1-1” channel.

After the failed OPEC meeting and an increase in drilling rigs, Brent could fall to $48.20, but this isn’t for certain. For this the cross needs to restore to 1.4818. A fall in the price of oil to the trend line at around $47.15 will see the buyers have an opportunity to reach 1.5029 (5th April maximum).

There’s no point in making large trades in long positions on this cross. After the weak US stats on Friday, the dollar started to be sold throughout the market due to expectations that the Fed won’t lift rates in June nor July. And since there is a negative correlation between oil and the dollar, oil could shift towards 54 dollars. Correspondingly, the euro/Canadian will U-turn downwards, moreover since the trend line isn’t broken as on the NZD/CAD. Since there’s a positive correlation between the EUR/CAD and NZD/CAD, it’s highly likely that we’ll see a shoot up to 1.5077. At the moment I don’t know what will take place to make this happen, but the technical picture is indicating a strengthening of the euro against the Canadian dollar.

Why not take advantage of the improved version of the Trader’s Calculator.

Calculate swaps and costs of points >>>