On Friday we had a disappointing labour market report from the US. Job creation in the non-farming sector of the country increased in May by just 38k, whilst it was expected to rise by 160k.

After the payrolls I always look at a countermovement against that of Friday. At the moment, the euro/dollar has returned to the U3. Taking the temporary factor for a rebound into account, the balance point is at 1.1285 at the LB. My target is 1.1293.

Today the news is something I’m not concerned with. The only exception I’ll make to this is Yellen speaking. She will do so at 19:30 EET. It will be really interesting to find out what she has to say about the payrolls and interest rates. Traders on Friday already factored the Fed keeping monetary policy unchanged in June and July into the prices.

The GBP weakened throughout the market after a survey from the Observer/Opinium was published. According to the survey, those wanting to leave the EU rose to 43% against 40% who wish to remain. The euro/pound gave support to the euro, but a correction could nevertheless not be avoided. 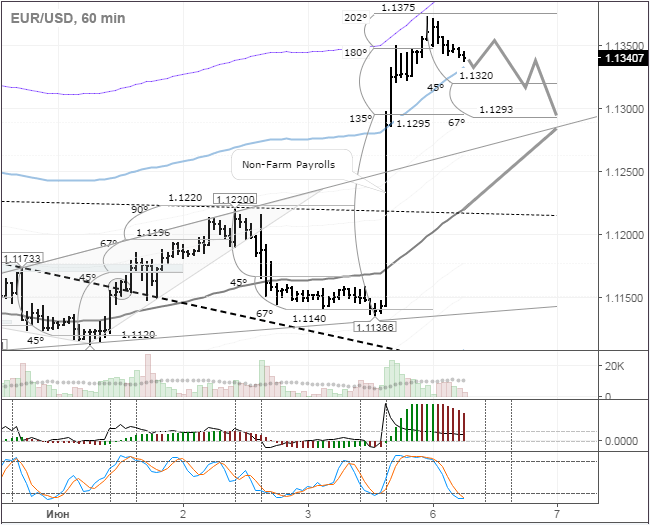 From the 1.1136 minimum the euro strayed upwards to the U4 or by 202 degrees. The interim resistance level is the 180 degree level. As I already mentioned, I’m ignoring the news today and expect a fall of the euro to 1.1295. Although this weakening may not take place due to Yellen speaking at 19:30 EET. The way the rate falls will set the tone for the future price pattern. Here we could either be returning back to 1.1215 or we’re heading to take 1.1470. A lot depends on what Yellen has to say.