On Wednesday the euro/dollar managed to lift above 1.14. Due to oil and gold prices rising, the euro’s strengthening was held back in the EUR/AUD and EUR/CAD crosses. The euro, just as did other currencies, received support from a weakened dollar which traders were selling due to reduced expectations of a Fed rate rise.

After Friday’s payrolls, the euro has been in a three-day upward correction. During this time, between the AO indicator and the price on the hourly we can see that a double bear divergence has formed. On the daily we have 1.1450 as a target. If the dollar will weaken throughout the market again today, this target will be reached today. I’ve dumped the bulls for the time being and am sitting on the side-lines whilst the rate hasn’t returned to 1.1375. I like how the indicators look for euro purchases on the hourly and the 4-hour period. A sharp correction could see the euro fall to 1.1360. 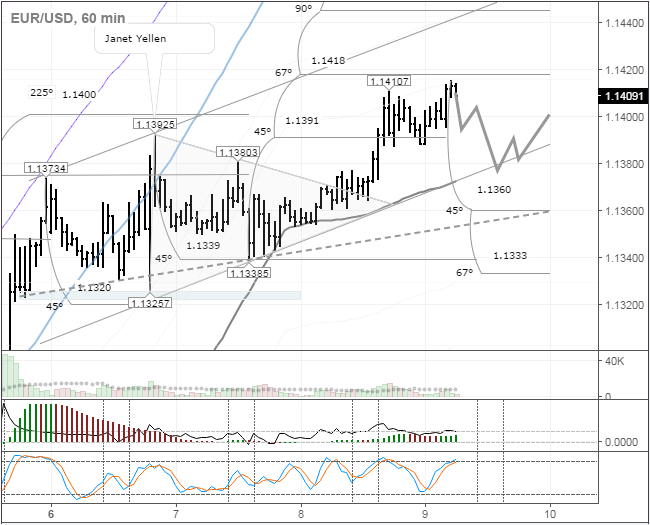 The euro’s growth has slowed around 1.1410. The price is in the middle of the channel. In Asia the euro has strengthened against the dollar to 1.1405. Meanwhile the volumes have not increased. Taking the bear signal (double divergence between the AO indicator and price) into account, in my forecast I’ve gone for a downward correction to the lower limit of the channel at 1.1375.

There’s another thing. On the option’s market for July futures at 1.15, open interest is significantly up. Since the price is out of the money, it will be defended by those who’ve sold it.