Market Participants Getting to Grips with UK Leaving EU

The euro and the pound updated their minimums against the dollar after the release of new surveys which indicated Brexiters are gaining more ground.

Yesterday surveys from YouGov and TNS were published. According to TNS: 47% of Brits are ready to vote for the UK to leave the EU, with 40% against leaving and 13% undecided. 2,497 people took part in the online survey. According to YouGov, 46% want to leave, 39% - remain and 15% are undecided.

The surveys reflected an increase in those wishing to leave the EU in comparison with previous values and with this the GBP weakened against the USD and euro. It seems the market has reached boiling point. Market participants are readying themselves for a Brexit and have switched to the Fed meeting.

A two-day meeting of the US Fed’s FOMC began on Tuesday. Its outcome will be in the public domain at 21:00 EET. It is expected that the interest rates will be left unchanged. After the meeting there will be a press conference held by Janet Yellen and the forecasts will be published.

If the yield on German 10-year bonds heads positive, the euro/dollar will shift up to 1.1240 (trend line). After Yellen speaks it’s unclear where the euro will close. 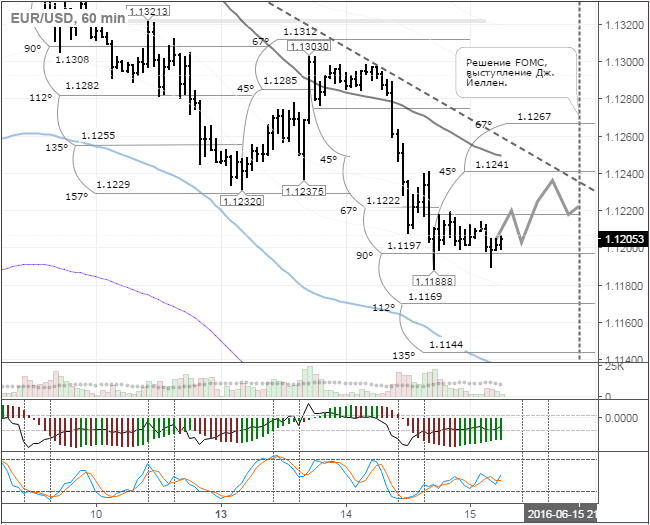 Due to the fall in the German 10-year bond yields, the euro has flown by the 45 and 67th degrees. The sellers have won back over 70% of losses which they incurred on 3rd June after weak US labour market data.

As I said above, the market participants are adapting to the negative Brexit survey results. This means that inside they are ready to buy the euro. If the Brits vote to leave the EU, the process of the Brexit itself will be drawn out and will take more than a year. Traders are interested in the process up to the referendum, not afterwards.

According to the hourly CCI indicators and the stochastic, bull divergence has formed and so I reckon we’ll see a strengthening of the euro, not a weakening of it. I’ve also incorporated a double bottom into my calculations. We can say that the conditions for a correction are ripe. We just need to pass 1.1220.