The euro/dollar closed up on Wednesday. Trades were volatile due to US stats. The pair restored to 1.1087 and then again fell under pressure due to ISM data for the service sector. The ISM’s index showed a June rise from 52.9 to 56.5 (forecasted: 53.3).

The euro bulls managed to restore their losses quickly as everyone was waiting for the release of the Fed minutes. The regulator is ready to raise rates, although members of the FOMC believe that more economic data is needed to take such a decision. Since they were worried by the last labour market report, the June report will attract a lot of trader interest: more than in May. By the end of the day the euro/dollar rose to 1.1111.

In Asia on Thursday, the euro/dollar corrected to 1.1074. It was a typical technical correction. By now the euro is being quoted at Asia’s opening price. The euro’s important event of the day is the US private sector labour market data from ADP and the initial unemployment benefit applications made there. Taking yesterday’s ricochet from 1.1029 and the close of the day at 1.11 into account, today I expect to see a continuation of the rally to 1.1140/50. 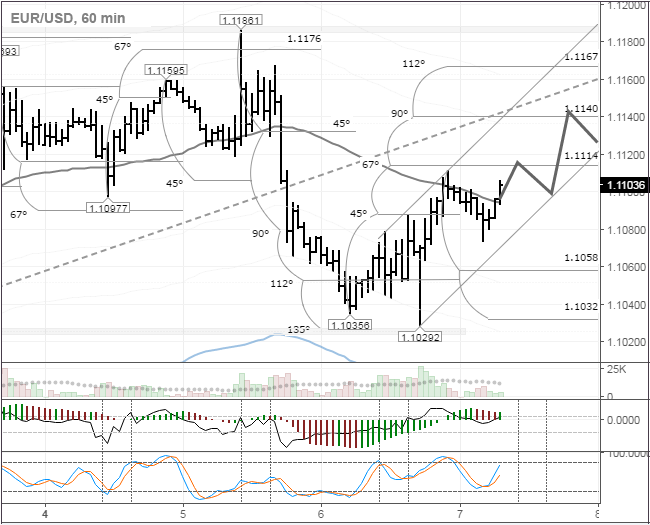 The 135th degree has stood strong in the face of attacks from the buyers. The pair flipped into the 112-135 zones. Up to now the rebound is 67 degrees. The session minimum was shifted by 6 points, so I haven’t bothered calculating the new levels from 1.1029. We just need to add 6 points each to the current levels and that is it.

As we see, the euro’s strengthening stopped around the 67th degree at the LB. After the morning’s correction, the bulls are trying to update the maximum. I reckon that, if 1.1115 is reached, the euro/dollar will switch into a correction phase and the subsequent growth for the pair will continue during the American session. Whether the bulls reach the target level or not will depend on the ADP data and the unemployment benefit applications.