On Thursday the euro/dollar closed down. The price movements were similar to a sideways with a bearish tendency. The euro bulls made three attempts to break 1.1150 and all three were unsuccessful. The dollar strengthened after the release of US stats for the labour market which were better than expected. This data had real significance before the publication of the NFP. The euro/dollar fell to 1.1052.

Job creation in the US private sector during June stood at 172k (ADP figures). The number of unemployment benefit applications for te week ending 2nd July fell to 254k.

In Asia the euro is trading slightly up against the dollar. Don’t expect any real movements before 15:30 EET. A consolidation of the pair at 1.1080 is expected in the first half of today.

Market participants have decided that they are going to wait and see what the NFP brings. What the market will do after the NFP is out is hard to say since the payrolls are notoriously hard to predict due to the constant reassessments and corrections made to figures. 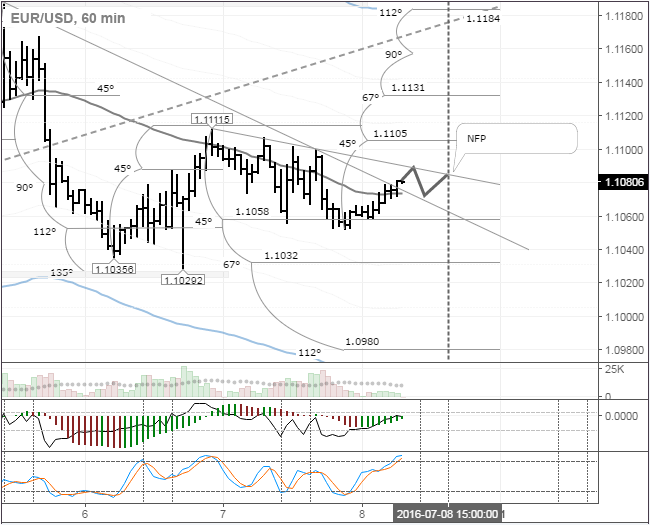 The 45 degree is a support this Thursday. My forecast is for up to 15:30 EET. How the NFP will come out is anyone’s guess. I do know, though, that last month’s week report saw the euro/dollar rise 200 points in three hours. The market expects that 170k jobs were created in June. How the traders will react to the report after the Brexit is also hard to say, but the price fluctuations will be heavy if there is any marked difference between the forecasts and the real figures.