On Wednesday, the euro/dollar rate closed down. During trades in Asia and Europe, the buyers were trying to resume the growth, but at 1.1000 they met with sell orders. This forced them to leave their long positions. As a result, the euro quickly cheapened.

Pressure on the euro piled up after the release of mixed US housing sector data. The number of houses which had been started to be built fell, but construction permits issued rose. On this news the euro/dollar fell to 1.0955.

The pair switched into a correctional phase after reaching 1.0955. The same thing happened on 18th October when the 1.0970 minimum was reached.

Today’s key event for the euro is the ECB meeting and Draghi’s press conference. No changes in monetary policy are expected from the regulator, but the euro looks vulnerable before Draghi is due to speak. During his speech the currency market is expected to be volatile. Traders are waiting for his explanation of the situation with regards to QE: i.e. does the regulator plan to tie the program up or not. Due to the ECB chief speaking I haven’t bothered with a forecast. 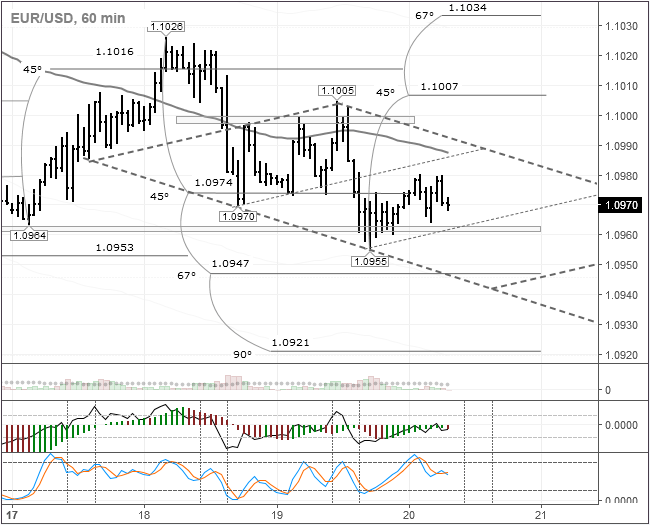 The market is continuing to throw buyers off the boat as it sinks, but somehow they’re just becoming more and more. Long/short is now 81/19. At the same time, the volumes before Draghi speaks have fallen.

In any case there are too many buyers for the price to ease upwards. The time has come for Mario Draghi. During his press conference he could change things up with regards to traders’ open positions.

The closest target for the sellers is currently 1.0947. Since the price is unpredictable when Draghi speaks, I haven’t done a forecast in my analysis for today. For the weights of the balance to be tipped in favour of the buyers, we need the day to close above 1.10.