EUR/USD: pinbar formed on the daily

On Thursday the USD managed to strengthen throughout the market during the American session. This allowed the sellers to close the daily candle down for the euro (pinbar). The US stats came out decent, but I think that the strengthening of the dollar was caused by technical factors and not fundamental ones. The euro dropped from its 1.0942 maximum to 1.0883.

In my forecast I’ve gone for a V shaped formation. It’s not worth being too serious with it since the news breaks all the patterns. Let’s bear in mind that there’s some important events planned for this Friday.

On Friday market participant attention will be on US Q3 GDP figures. The preliminary GDP figures have a powerful effect on all the markets. It’s expected that the US economy in Q3 grew by 2.5% YoY. The assessment is a high one, so if the data doesn’t reach the forecast, the dollar will crumble throughout the market. 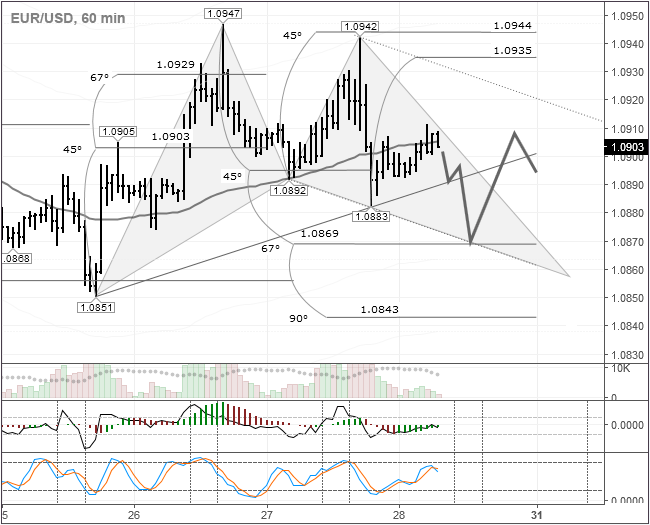 The euro didn’t make it too the calculated level. Time was lost on the European session during the rise of the euro bulls to 1.0942. From here the price dropped to 1.0833. In Asia the pair is trading at around 1.0903. Since a pinbar has formed on the daily, I’m expecting to see the euro weaken further to 1.0868. If there were no upward correction from 1.0833, we could be looking at a target of 1.0851. If the US GDP figures meet market expectations, we can expect the price to fall to 1.0851. I reckon that the market will sit in a sideways until next Friday when the NFP comes out.