The euro/dollar closed slightly down on Monday. After a fall to 1.0936 the price rose to 1.0982. The pair bounced from its minimum following the GBP upwards on news the BoE’s Mark Carney will remain governor until the end of June 2019. On Thursday he will hold the latest BoE meeting regarding interest rates for the UK. After this we will see the minutes from the meeting and an inflation report.

The euro is going for 1.0967 dollars in Asia. Since the euro/pound is locked in with euro sellers, any strengthening of the euro against the dollar will be restricted. I reckon that a growth in the quotes will start from 1.0947.

Keep an eye on the euro/pound cross. Today will see a UK report on business activity. If it comes out weak then the euro/pound cross’ movements will switch from downwards to upwards. In this case the price is unlikely to reach the calculated minimum. If the indicator comes out strong then we can stick to my scenario. The euro will drop to 1.0947 and then will shoot up after the pound. 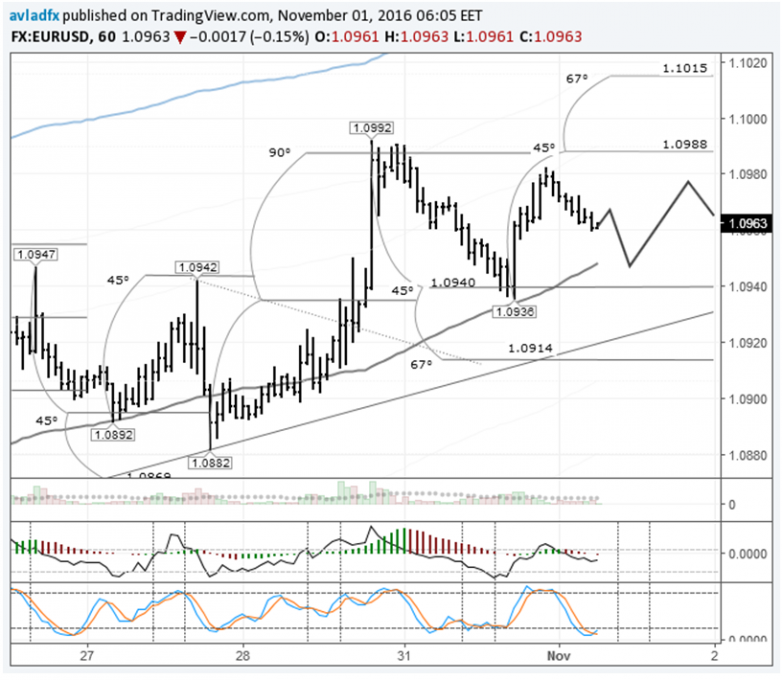 On Monday the price didn’t make it to the target by just three points. As I expected, the pair slid from the balance line. The fall was down to Carney deciding to stay in the UK until June 2019. The pair’s growth was limited to 1.0981 due to the fall in the euro/pound.

The euro is going for 1.0966 dollars. The oscillator stochastic is forming a euro buy signal. In principle, the euro could rise from its current level, but it would be better to do so from 1.0947/50. Since the US Fed will issue its interest rate decision on Wednesday, I don’t expect to see the price leave the 1.0936-1.0992 range today.