On Tuesday the euro/dollar closed down. The American stock indices closed up. After the FBI brought their investigations into Clinton to a close, many believed that she would become the 45th US president. The euro stabilised then at 1.1011.

As the data came in in favour of Clinton, the euro/dollar fell to 1.0990. But the situation quickly changed. Trump has broken ahead. The euro rose against the dollar by 2.72% to 1.1283. No one believed that the Yanks would vote for Trump in such numbers.

At the time of writing this analysis, Trump is on 244, whereas Clinton is on 215. He has just 26 votes to gather to become president. The formal voting procedure for electoral colleges will take place on 19th December. On 6th January, 2017, congress will confirm the results. The inauguration of the US president is set for 20th January. Due to this I haven’t bothered to forecast the euro’s movements since anything could change at any time. I can only say that the road is open to 1.1308. This is a level from which a correction could start, but this isn’t 100%. If Trump takes it, the euro will shoot up to 1.15. 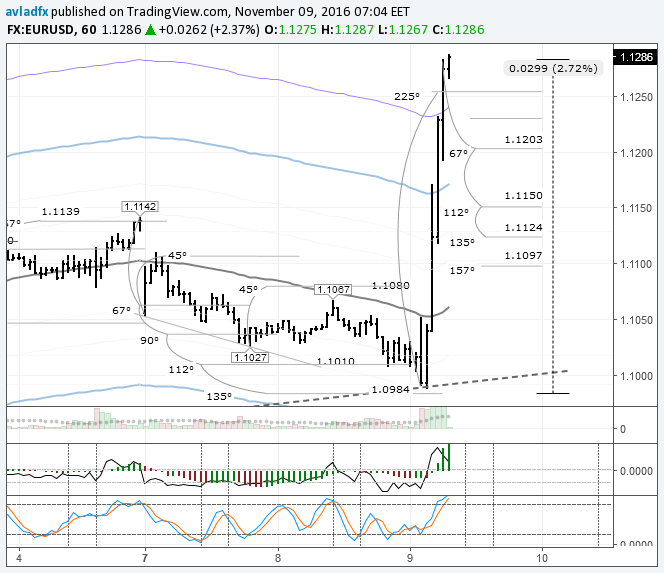 The Gann levels are calculated on the basis of a 1.1283 maximum. At the moment the new maximum is fixed at 1.1295. We need to add the point difference between these maximums to the calculated levels. If the buyers again manage to shift it, we will have to recalculate the levels again.

The price is in a zone way off the beaten track (above the U3). The euro has been chased up there by the Americans voting for Trump. The euro/dollar has neared the MA line U5 at 1.1308. The MA line U6 passes through 1.15. The line is there for in the event of anomalous price deviations from the LB. On this graph you can’t see it. If the euro bounces, then it will head to the U4 at 1.1176. With every hour that goes by it will rise by 5 points.