On Tuesday the euro/dollar closed down. In the first half of the day the euro rose to 1.0817 against the dollar. The growth in the pair was caused by UK inflation data which didn’t meet market expectations.

By the evening the situation had changed. By the opening of the American session, traders were again buying GBP and not for no reason. The GBP was rising against the other key currencies due to speculation that the UK’s exit from the EU could stretch two years. Sky News highlighted the words of UK supreme court law lord Brenda Hale.

Taking into account how the market’s ditching of US bonds has calmed down for the moment, the euro/dollar managed to stick it out at 1.0709: a minimum from 14th November. Support for the dollar came from US retail sales figures. According to data from CME Group’s FedWatch, the likelihood of a US interest rate hike in December has risen from 86% to 90.6%.

This morning’s price bounce from 1.0714 and break in the trend line have given me the basis for the forming of a double bottom. Taking into account that the euro is feeling unimportant against the pound, a strengthening of the euro is expected in the second half of the day can be expected before the hourly indicators are worked off. In Asia the American bond market is still up, so my target for the euro is 1.0821. 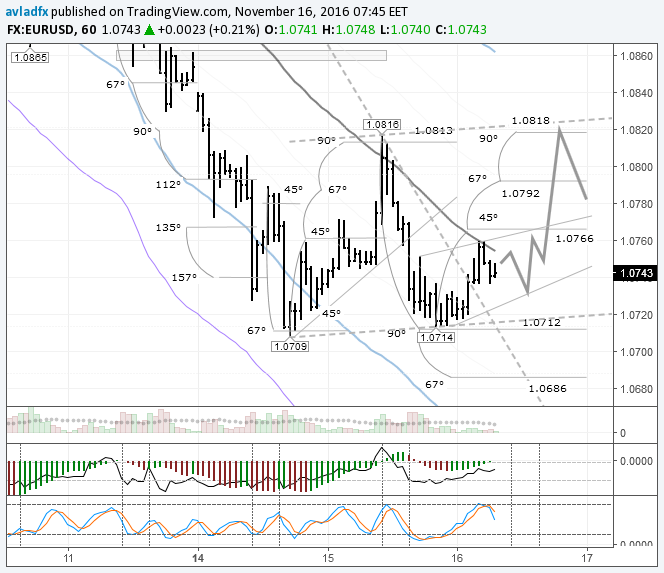 The likelihood of a December rate rise is up to 90.6%. The hike is already taken into account in the prices. As such, trader attention is solely on the bond market at this moment in time.

In today’s forecast I’ve gone for a rise in the pair to 1.0821. Above I said that there is grounding for such reasoning: a bounce from the 1.0714 minimum in Asia and a break from the trend line. A rise to 1.0770 would be a good sign for the buyers. I expect a rise in the second half of the day since the hourly oscillator stochastic isn’t set right for the purchase of euro.

Since the euro has recently been fumbling around at the 90 degree level, I’ve set my target along this Gann degree. Above it runs the upper line of the channel.