EUR/USD: awaiting an upwards correction to 1.0570

On Wednesday, the EUR/USD pair closed in the red. The last three speeches from Fed members (Harker, Kaplan and Williams) has put the question of a rate hike in March back on the agenda.

The Fed Fund futures prices at CME Group have put the probability of a rate hike this month up to 66%. A growth in US bond yields has created more demand for the dollar. The euro rate fell to 1.0514. This fall was mitigated by growth of the euro index and of German 10-year bond yields.

On Wednesday, after an upwards correction to 1.0572, the rate returned to 1.0528. Looking at inter-market and technical analysis, I'm getting quite an unclear picture for Thursday.

Considering that traders are expecting the possibility of a rate hike from the Fed this month, I think one must expect the euro to weaken in keeping with the trend. Today, I'm sticking to the cycles and patterns, which are suggestive of a correction for the euro to 1.0570 by the end of the day. There's still time before the FOMC sits down, so I've gone for an upwards correction. 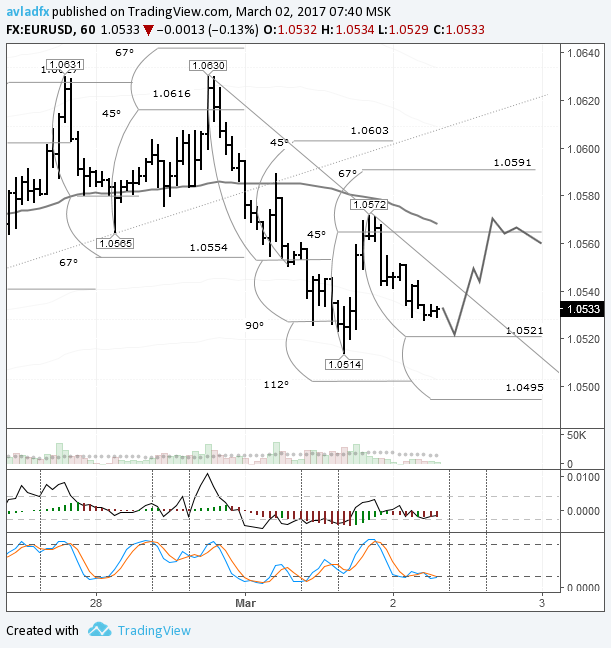 My expectations of a weakening euro yesterday came off in full. The rate fell to 1.0514. The pair didn't make it to the 112th degree as it rebounded on the back of a rise in German 10-year bond yields by 36% and growth on the euro index.

For Thursday, I'm forecasting some correctional movement to 1.0570. As I've written above, the picture I'm getting isn't all that clear, but I've based my predictions on cycles and patterns, which point to a restoration for the euro.

I expect that the euro's growth will begin from around 1.0521, although it could be from 1.0514. A breaking through of the trend line would show us which factors are having an influence on the dynamics of the currency pair.

Positives for the euro ( ):

( ) The threshold for acceptable US government debt of 20.1 trillion USD may be reached by March this year. This will create headaches for new US president Donald Trump. A new law on the debt ceiling will come into force on the 16th of March 2017;

( ) Greece may need less money than the IMF had planned for;

( ) François Bayrou, leader of the "Democratic Movement" party, has ruled out running for the presidency and thrown his weight behind independent candidate Emmanuel Macron;

( ) According to data for 21/02/17, small time speculators on the Chicago Exchange have increased their long positions by 1,687 contracts and reduced short positions by 2,888 contracts;

( ) EURGBP: On the daily timeframe, the cross is in a phase of growth. The target is 0.86, after which a fall is expected;

( ) EURUSD: On the daily timeframe, between the Stochastic indicator and CCI, some bullish divergences have formed;

( ) Cycles are indicating growth for the euro until the end of the day;

Negatives for the euro (-):

(-) The ECB has no plans to curtail its QE program. According to the minutes of the latest meeting, most members of the Governing Council don't believe it necessary to reduce the amount of stimulus (long-term impact);

(-) Head of the Philadelphia Fed, Patrick Harker, believes that a rate hike in March is possible;

(-) Dallas Fed president says it's better to raise rates sooner rather than later;

(-) John Williams, head of the San Francisco Fed, says that FOMC members will give serious consideration to a rate hike this month;

(-) Political risks in Europe are growing (French elections and Brexit);

(-) Greece is unable to reach a deal with its creditors for financial assistance;

(-) Recent statistic favour the US;

(-) EURUSD: the daily Stochastic (5,3,3) and CCI indicators are looking downwards;