EUR/USD: no drivers for a bullish impulse

Trading on the Euro on Monday ended up slightly in the red as Europeans celebrated International Workers' Day. Activity was very low during the first half of the day. In the US session, the Euro jumped to 1.0924. It rose along with US bond yields, which shouldn't have happened. This movement in one direction was brought about by the EUR/GBP cross, which closed up at the end of the day. Trading ended on the EUR/USD instrument at 1.0896. The price stayed within Friday's range of 1.0857 to 1.0947.

The rise in US bond yields did act as a support for the US dollar despite the statistics released in the US did not meet market expectations. It's worth noting that these weak statistics increased the probability of the Fed raising interest rates in May, June and July.

Here, traders are betting on the dollar due to upcoming growth in US GDP for the year on the back of tax reforms. Mnuchin, US finance minister, said that tax cuts would help stimulate growth of the economy in the short term.

Traders will be focusing their attention this week on three important events: a decision from the FOMC (3 May), US jobs report (5 May) and the French presidential election (7 May). Markets will be closed on the 7th of May, so we'll see the reaction to the election on the 8th.

The Euro is currently trading at 1.0914. The instrument has been caught in a sideways trend for the last few days and its range is narrowing. Taking into account the upcoming events, some are of the opinion that buyers won't be able to push the price above 1.0950 on Tuesday. I'm inclined to say that they won't even make it to this level. As quotes on the EUR/GBP pair rise, I'm expecting the 1.0945 level to be tested, followed by a ricochet to around 1.0898. 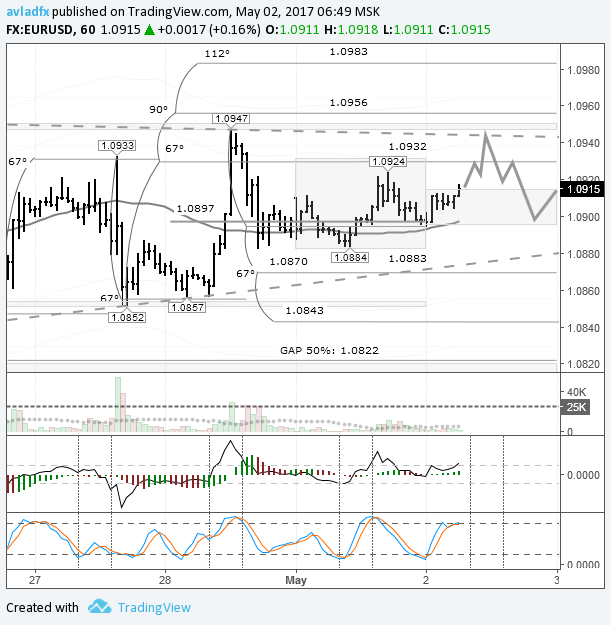 My predictions for Monday came off for the most part. Due to the public holiday, Monday's range turned out even smaller than Friday's. 70% of the day's trading volume occurred within a range from 1.0896 to 1.0914. The largest volume was traded at 1.0906 against 1.0897 the day before.

The hourly Stochastic indicator is in the buy zone. In theory, sellers are ready for an assault and a testing of the 1.0875 level. Considering yesterday's divergence between the EUR/USD and GBP/USD, there is a suspicion that buyers will be able to push the Euro up against the dollar to 1.0940/45 before it falls again. A sharp rebound would indicate that a major player has entered the market, whose intentions will then be followed closely until the end of the day.

If buyer activity is low when the price is around the minimum, we can expect the Euro to slide as far as 1.0824. The technical picture on the daily timeframe also casts doubt on price growth. As per my forecast, I'm expecting a testing of 1.0945 level followed by a ricochet to around 1.0898.

( ) French elections: Emmanuel Macron won the first round of voting by a small margin;

( ) S&P has reaffirmed Germany's credit rating at AAA/A-1 with a stable outlook;