EUR/USD: quotes expected to recede towards the trend line

After trading on Friday, the Euro closed with some nice growth against the greenback. The price consolidated within a narrow range around 1.1108 during the Asian session. As trading opened in Europe, the rally continued. By the time of the US session, Euro-bulls had returned the rate to 1.1172. New York trading brought it up to 1.212.

While political tensions in the US have eased slightly, the general sentiment around the dollar remains the same. Its slide could be triggered by commodity currencies, who have strengthened on the back of rising oil prices.

FOMC member James Bullard added fuel to the fire when he cast doubt on the feasibility of an interest rate hike taking place in June, noting the economic slowdown that took place in the first half of this year as well as the fact that the labour market has been in decline since the Federal Reserve's most recent meeting.

Looking around, I can't see any indications of further growth for the Euro. Looking at technical factors and the Euro index, the road to 1.13 is open for Euro-bulls. Given that the Euro closed up on Friday, I'm expecting today's movements to go against that, as is my general rule. Quotes should fall to the trend line. So as to avoid risky sales, I think it's better to avoid trading today, as there are no clearly defined sell signals and the profit/risk ratio is low. 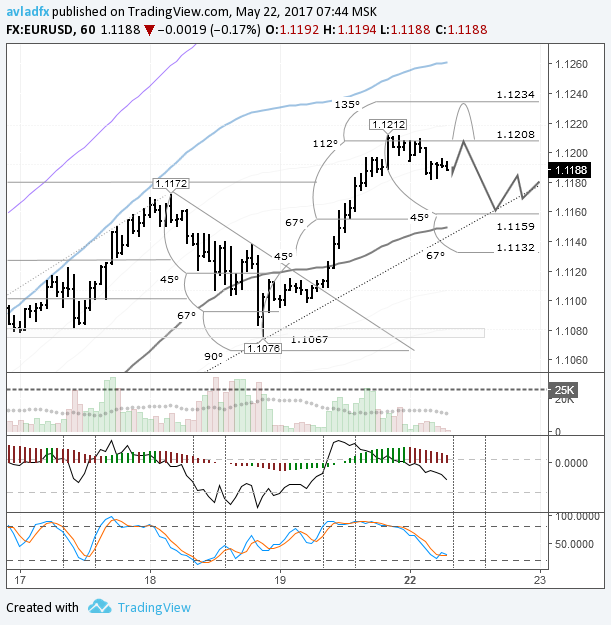 On Friday the 19th of May, the Euro closed up. Euro-bulls held at the 112th degree. In Asia, the Euro is currently down, but the bulls are unlikely to give up so easily. The Euro's rebound isn't very deep, so there is a risk of an updated maximum. In this regard, there are more willing sellers than buyers for the Euro.

For Monday, I'm expecting the Euro to go against Friday's movements towards the trend line at 1.1160 or the 45th degree at 1.1159. If there isn't a flat on Friday, then I always go for opposing movement the following Monday. Statistics from the beginning of this year show that Monday's candlesticks have closed in the opposite direction to Friday's 79% of the time (15 weeks out of 19). If trading on the Euro closes up on Friday, it'll close down on Monday and vice versa. This effect was weaker in 2016, with it only working 61.5% of the time. Movements in general were weaker and corrections not very deep. Personally, I won't be trading today. If you're looking to sell Euros, I suggest waiting until the Stochastic indicators on the EUR/USD and EUR/GBP pairs are in the sell zone.