On Monday, the Euro closed up against the US dollar for the second session in a row. Since the 11th of May, the single currency has appreciated by 3.76% or 408 pips. It's been updating its highs for 7 days, just like the bitcoin.

The EUR/GBP cross is in unison with buyers, so sellers are struggling to break out of this upwards movement. Market participants are only paying attention to information that moves the rate in the direction of the trend and not against it.

The primary driver behind yesterday's rally was German chancellor Angela Merkel's comment that the Euro was too weak due to the ECB's soft monetary policy. There was nothing new about her comments, but traders decided to make a big deal of it. They began to speculate that Germany, through its ECB representatives, will insist on a tightening of their stance on monetary policy this year. The Bundesbank's monthly report also came into focus.

The EUR/GBP cross has grown amidst the panic surrounding Brexit talks. The UK could walk away from talks if the EU continues to insist on a divorce payment of 100bn EUR.

Partial profit-taking from investors as well as statements from FOMC members regarding interest rates put pressure on the cross. This pushed the Euro against the dollar down from 1.1263 to 1.1229. 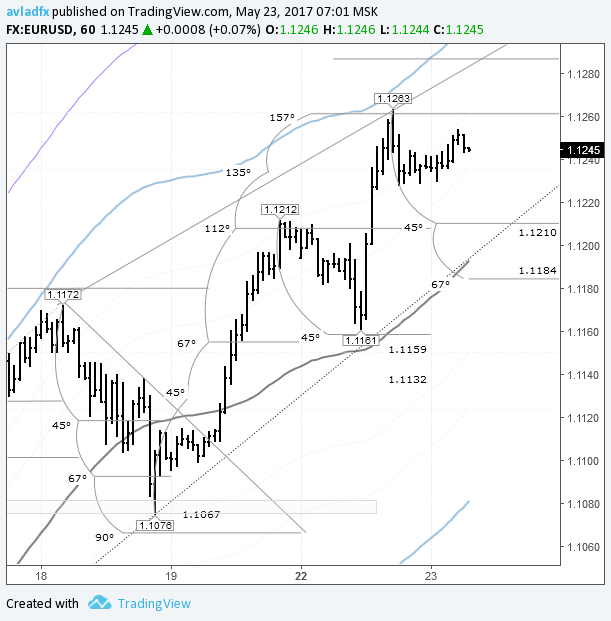 On Monday, the EUR/USD rate fell to an estimated level of 1.1161, but closed above 1.12. Merkel, along with the anxiety surrounding Brexit talks, have elevated the Euro to 1.1263.

I'm not making a forecast for today because the market is only taking in that which makes the Euro stronger. As such, I don't have any ideas for intraday trading. The closest resistance on the EUR/USD pair is at 1.1330 level. Unless the EUR crosses reach certain important levels, the EUR/USD will continue to climb against the trend. A trend with support from the crosses is dangerous for short positions. In order to start looking for sell signals, we need to consolidate below the trend line. The current hourly bar runs through 1.1193. If we see a double top form on the hourly timeframe of the Euro index, then there's a chance of seeing a subsequent downwards correction to 1.1207.