EURUSD: correction on the Euro underway

The Euro/dollar pair closed Tuesday's trading down. Sellers managed to almost completely erase Monday's gains (engulfing the body of the candlestick). A rise in US bond yields in response to increased probability of the Fed tightening their monetary policy in June acted as a catalyst for the US dollar's growth.

The dollar was also bolstered by the release of the proposed budget for the 2018 fiscal year as well as hearings in Congress regarding Donald Trump's Russia ties. A White House representative stated that the hearings in Congress confirm that there were no ties between Russia and Trump's election campaign. Remember that it was the threat of impeachment that caused the EUR/USD pair to surge to 1.1268.

During the US session on Tuesday, the trend line was broken through. The Euro fell to 1.1175. Sellers now need to consolidate below the 1.1161 low in order to trigger a mass closing of long positions on the Euro, which were opened from 1.0839. Clearly, the profit-taking has already begun, but the current decline isn't enough to form a trend.

There are a couple of positive signs for sellers. On the daily timeframe, a pin-bar has formed on the EUR/GBP cross. This is emitting a sell signal for the Euro, which was started in Asia as the cross fell below 0.8619 (yesterday's low). The immediate target on the cross is 0.8575. A fall for the cross means the same for our main currency pair.

Moody's rating agency has downgraded China's local and foreign currency ratings from Aa3 to A1 and changed its outlook from negative to stable. The Aussie dollar reacted negatively to this news, and is currently one of the biggest losers against the US dollar. It will likely bring some other currencies down with it.

Considering all the factors stated above, I'm going to risk saying that the Euro will fall today to 1.1136. Given that a lot of long positions have built up over the last few days, if we see some aggressive selling, we could see the Euro's decline speed up towards the D3 MA line at 1.11.

Tonight, the US Federal Reserve will publish the minutes from its last meeting. 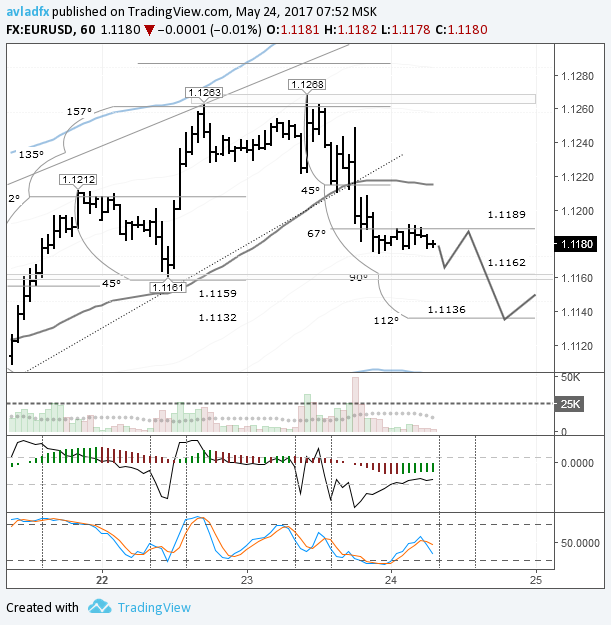 During Tuesday's trading in the US session, the trend line was broken through. The Euro fell to 1.1175. The price fell below the lb balance line and the 67th degree. Considering that sellers have engulfed the body of Monday's candlestick, and that a daily pin-bar has formed on the EUR/GBP cross, I'm envisaging a further slide for the euro against the dollar to around the 112th degree at 1.1136. On the hourly timeframe, you can consider the maxima at 1.1263 and 1.1263 a double top.

If sales intensify below 1.1160, and the rate starts to fall faster than I predicted, we should try to hold on to 1.12 level. As long as the rate remains higher than Monday's low, there's a risk of it receding to the lb balance line at 1.1215.

( ) Political tensions in the USA;

( ) German chancellor Angela Merkel: the Euro is to weak because of the ECB's ultra-loose monetary policy;