EURUSD: increased risk of falling to 1.1155/65 after FOMC meeting

On Wednesday, trading on the EUR/USD pair closed slightly up around 1.12. After weak consumer price and retail sales data from the US, the Euro grew to 1.1296. Buyers undertook as assault of 1.1300 level on the assumption that the Fed would decide against raising interest rates or at least refuse to raise them until the end of the year.

The dollar has overcome some intense pressure. The FOMC increased the key interest rate by 0.25% to the 1% - 1.25% range. The regulator also revised its GDP forecast upwards and is planning to start reducing its balance sheet later this year. After the meeting, the Euro fell to 1.1193.

Sellers have completely erased the gains made by the pair from 1.1200 to 1.1296. This led to the formation of a long shadow on the daily candlestick, which suggests an increase in pressure on buyers is in store. To make buyers start worrying about a drop, sellers need to bring the rate down to 1.1165. In order for sellers to start taking profit, quotes need to fall below 1.1115.

On Thursday, trader attention will be focused on the Bank of England’s meeting. I think that today, our currency pair will trade within the same range as yesterday. As it stands, I can’t see the Euro falling against the dollar any further than the 1.1200 mark.

Fed Fund futures put the likelihood of a further rate hike at the FOMC meeting in September at 18.4%. The probability of another hike before the end of the year is 44.8%. 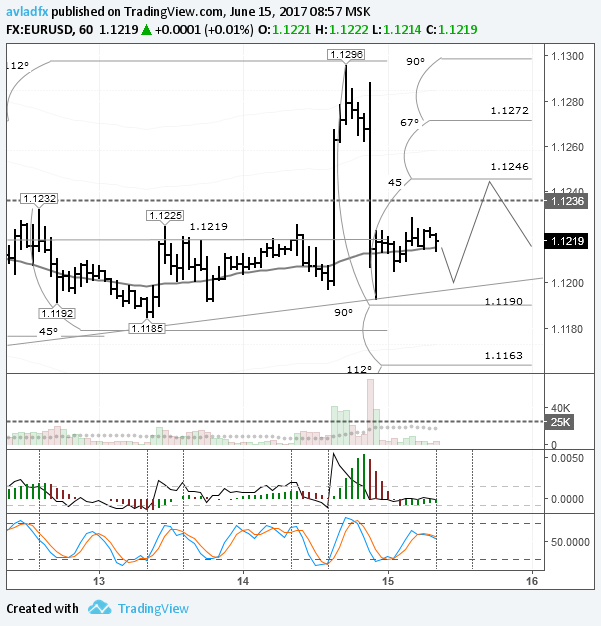 Yesterday turned out quite nicely. After weak US data, the Euro went up to the 112th degree. After the Fed’s rate hike, sellers pushed the rate back to the level at which it opened in the Asian session.

What next? Yesterday’s unsuccessful attempt by Euro bulls to break 1.13 level has aggravated the situation. As a result of the Euro’s slide, a long wick has formed on the daily candlestick, which would suggest that the bullish trend has come to an end. While the pair is trading above 1.1175, it’s too soon to talk about a general weakening of the Euro.

The FOMC meeting has passed. In July, interest rates will be within a range from 1.00% to 1.25%. Traders expect the Fed to increase rates by another 25bp in their meeting in September. In inflation doesn’t grow, this will happen at the end of the year. Trader attention now turns towards the Bank of England.