On Friday the 8th of September, trading on the euro/dollar pair closed down. After hitting a new high of 1.2092 in Asia, buyers started cashing in on their long positions during the European session. The rate first fell to 1.2036 (-56 pips). During the second wave of euro selling, it fell against the dollar to 1.2015 (-21 pips).

The US dollar index closed up. It strengthened after a speech from FOMC member Dudley and after Congress’ decision to temporarily raise the government’s debt ceiling. Dudley stated that restoration works after hurricanes tend to lead to a rise in economic activity in the long term. US 10Y bond yields have increased. 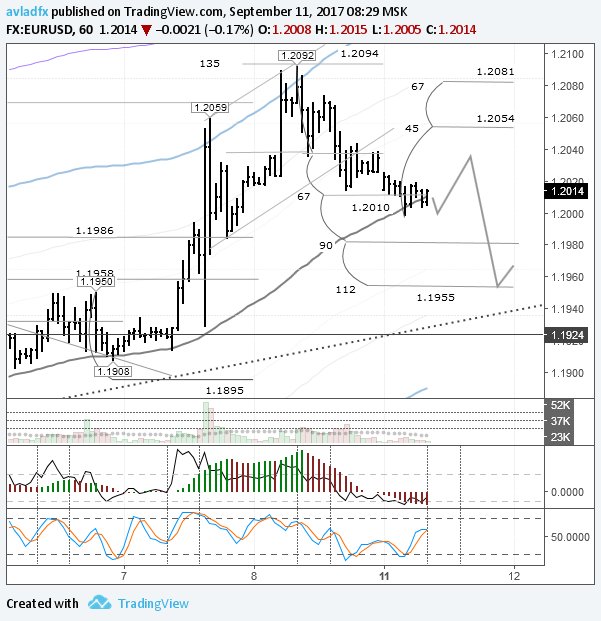 On Monday the 11th of September, as trading on the currency market got underway, the euro opened down. The opening price was brought about by investors abandoning the safe havens given that the weekend passed without any trouble. In celebrating North Korea’s founding day on the 9th of September, Supreme Leader Kim Jong-un stopped short of marking the occasion with a missile launch. The Japanese yen, Swiss franc, and gold are all trading down.

In Asia, US 10Y bond yields have risen sharply, while the euro rate against the dollar has retreated to the LB balance line. Now let’s look again at the dynamics from the 29-30th of August. The price first corrected to the balance line, and then the drop continued to the D3 line. The economic calendar for Monday is empty, so I’m predicting a rise to 1.2035, followed by a drop to 1.1955. Over the last few days, a candlestick with a long wick has formed. The bearish signal could be extinguished, but in any case, be careful with buying.