EURUSD: the market is balanced and the rate is poised to deviate from the LB

On Thursday the 14th of September, trading on the euro/dollar currency pair closed slightly up. In the European session, the single currency fell against the dollar to 1.1838. The pair shed 50 pips in the space of a minute after consumer inflation data was released in the US. Consumer prices turned out higher than expected and higher than the previous value.

25 minutes later, however, buyers had recovered all their losses. The majors were brought out of negative territory by the British pound, which shot up by more than 200 pips after the BoE meeting and later ignored the US data. Traders may have harboured some doubts over whether the Fed would raise interest rates in December.

US 10Y bond yields reacted with a jump to the US data, but its subsequent slide weighed down on the dollar, while having a positive effect on the euro, which recovered to 1.1922. 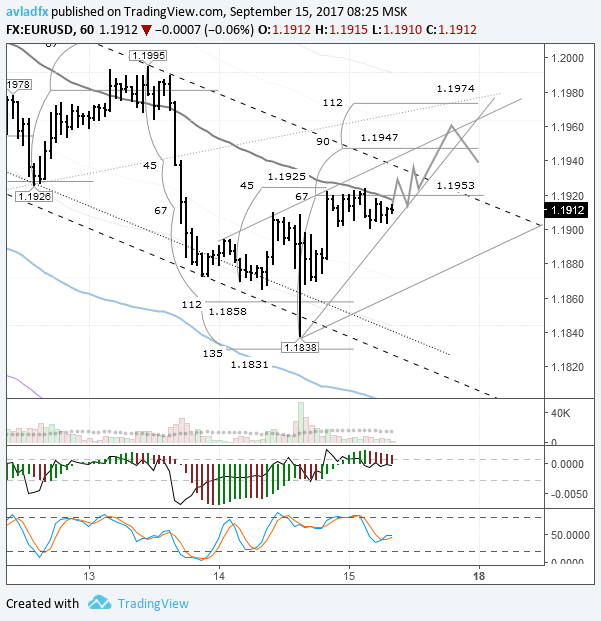 The main piece of news for all markets today is North Korea’s latest ballistic missile launch. The US, Japan, and South Korea have requested an emergency meeting of the UN Security Council to discuss the matter. Safe haven assets reacted sluggishly to the news, but demand for them could rise during the US session before the weekend starts.

At the time of writing, the euro is trading at 1.1915. The price is currently sitting on the balance line. This means that the market is balanced on the hourly timeframe and the price is ready to deviate from this by either 0.62% or 1%.

The price is currently perched on the 67th degree. Trading volume is very low in Asia. The trend line runs through the 1.1934 mark, and the 90th degree runs through 1.1947. The euro remains under pressure from the euro/pound cross after yesterday’s BoE meeting. I’m allowing for a drop to around 1.1895, although in terms of the bigger picture, I’m expecting to see the euro rise to 1.1960 over the course of the day. The candlestick’s long tail with a 1.1839 low rather ruins the picture for the bears.

From today’s news items, I’d give particular importance to the BoE’s quarterly report. I’ll warn you now that some strong movements are expected on the pound at this time. The pound could easily drop as far as 1.3250 with everyone having forgotten about yesterday’s decision (the crowd effect). In the States, data on retail sales is to be released, as well as on industrial production, the New York manufacturing index, and Michigan University’s consumer sentiment index.