On Friday the 15th of September, the euro/dollar rate closed slightly up. The US dollar index continued its slide on the back of weak retail sales data for August coming out of the US. Month on month, retail sales fell by 0.2% in August, while the readings for June and July were revised downwards. In addition to this, industrial production in August fell by 0.9% as a result of the destruction of Hurricane Harvey. Weaker US data increases the risk of lower GDP growth in the third quarter. After the release of statistics on Friday, the Atlanta Fed significantly revised its GDP forecast for the third quarter; from 3.0% to 2.2%, while the New York Fed revised its forecast from 2.06% to 1.34%.

This week could turn out to be important for all currency pair involving the US dollar. This Tuesday marks the beginning of a two-say sit-down for the US Federal Reserve on monetary policy, the results of which will be published on Wednesday at 21:00 (GMT 3). In my opinion, if the Fed decides to tighten its monetary policy, for example, by announcing a hike in the key rate, despite the probability of doing so being next to nothing, the US dollar could begin to decline again. The greenback could receive some psychological support if the Fed decides to maintain interest rates at their current level of 1.00% – 1.25% and give an indication that they will raise interest rates at a slower rate than had previously been proposed. The US economy is currently going through a rough patch and a tightening of monetary policy would have a negative influence on the dollar.

The EURUSD pair is continuing to move in an upwards trend on the 4-hour timeframe. 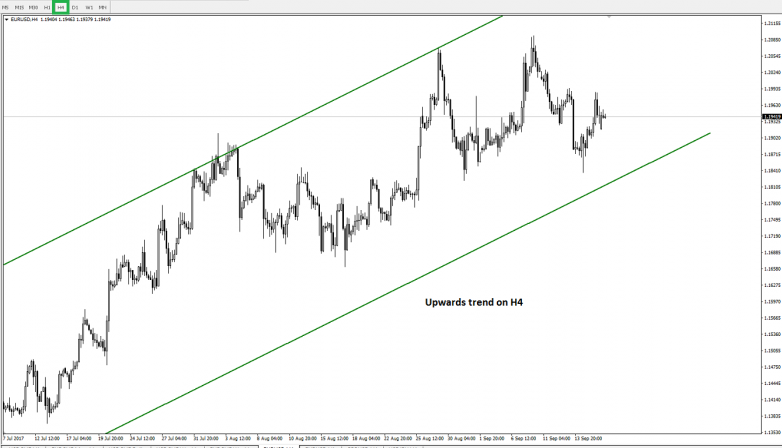 After some correctional movements, which took place in the second half of last week, the price is trying to restore the upwards trend, but there are currently no buy signals.

On the hourly timeframe, the EURUSD pair is moving within a potential range of 1.1835 to 1.2088. The price is likely to keep trading within this range until the Fed’s two-day meeting comes to an end on Wednesday.

On the 4-hour timeframe, the GBPUSD pair is moving in an upwards trend:

After the BoE’s meeting last Thursday, the pound received some support. The Bank of England upgraded its economic growth forecast for the UK in the third quarter of 2017. The GBPUSD pair is currently approaching the resistance line. At the time of writing, the GBPUSD pair is trading at 1.3595.

If the Fed decides against tightening its monetary policy on Wednesday, I expect the USDJPY pair to go up. I’ll be looking for an entry point on the hourly timeframe. Considering that a range is expected to form here, the volume of my potential trade will be significantly limited (I simply prefer trend trading).

I’d like to remind everyone that the Fed’s two-day meeting starts tomorrow. It could be a very volatile week. I’m not going to speculate on the Fed’s decision. I think it better to simply wait to open trades on the dollar until after Wednesday.