In order to better understand the current situation on cryptocurrency markets, let us recall a famous story. An analyst and a trader both go into a lift. The trader, before pressing any of the buttons, turns to the analyst and says; “Spare me your clever little tricks and just tell me; are we going up or down?” The analyst answers; “First of all, we need to be clear which floor we’re on. Secondly, in any case, we can’t go higher than the roof, and we can’t go lower than the basement. Still, we can’t rule out the possibility that the lift will get stuck or change direction owing to extreme circumstances”.

It’s not at all easy to predict the exact price of a certain asset at a specific time. The analyst may have an advantage in that they give a general indication of where the price may end up, which is enough to make a trading decision. As far as this relates to Bitcoin, I’ve got some good and bad news. The bad news is that there’s no point in expecting the bitcoin’s explosive growth to continue. The good news is that there is still the potential for phases of growth. I reckon that the bitcoin could hit the 10,000 USD mark at some point next year. In the future, I think that growth to 100,000 USD is possible, but not to a million. In other words, I can see the price growing from its current level by a factor of 20, but not by 200. I’ll now try to explain where I’m coming from.

Assets grow most strongly during the earlier phases of their development. Its acceptance within the investment community provides for further growth, but not as strongly as before. As far as Bitcoin is concerned, it’s gone through several phases during its 10-year history. In the beginning, the bitcoin was simply a conventional unit, and transactions that took place among the “IT geeks” who founded the blockchain technology were executed at bitcoin prices of around 0.3 – 1 USD. The situation changed after Forbes published an article on Bitcoin on the 20th of April, 2011. This captured the interest of people close to the IT industry. From 2011 to 2013, the price of bitcoin rose from 1 to 300 USD (it even briefly hit 1,000 USD). For the next 2 years, the bitcoin was volatile and fluctuated within a range of 200 - 300 USD. A large number of private investors started to show an interest in the currency in 2016, and the price has risen tenfold in the last two years from 400 to 4,000 USD. Growth was exponential. This year, the growth continued and even outpaced the exponent, which is why the bitcoin currently looks slightly overbought (see fig 1). 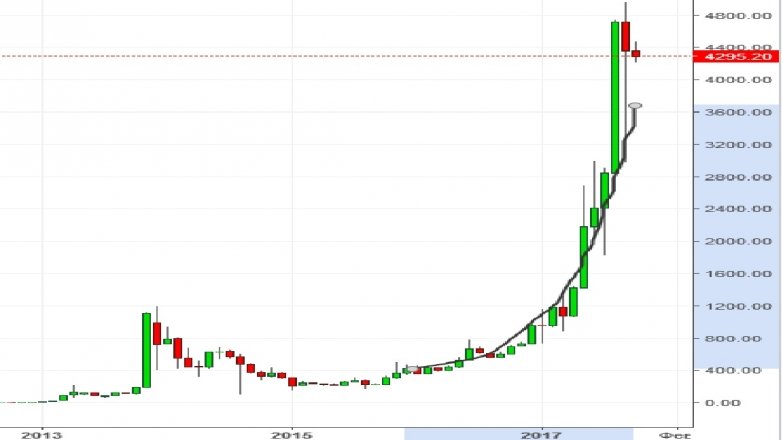 The next phase is investment in bitcoin from major funds, which has already begun. According to data from Autonomous NEX, around 70 hedge funds have already invested in bitcoin. Some more traditional funds are taking a more cautious approach as they await approval from regulators to invest in cryptocurrencies. As soon as that happens, we’ll see a new wave of growth for cryptocurrencies. Still, this process is not likely to go smoothly, so we should see plenty of jumps and slides. Nevertheless, volatility will subside as time goes on. 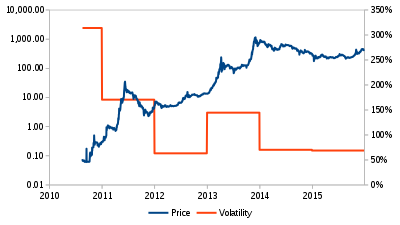 At the time of writing, cryptocurrency’s market cap is around 130bn USD, this is around 0.5% of the market cap of the US stock market. Blockchain technology is continuously being developed, and once cryptocurrencies start to gain official recognition, they’ll start to carry more weight on financial markets. Still, it’s highly doubtful that the collective value of cryptocurrencies will ever be comparable to the total value of all US corporations and US GDP (18.5 trillion USD), so growth by a factor of 200 is unlikely. At the same time, growth by a factor of 20, taking into account that global money supplies increase every year, is perfectly possible. In my view, it’s still very much possible to get rich from cryptocurrencies. Should we see a rising star among the altcoins that lacks the deficiencies of its predecessors and provides new opportunities; should you be among the early adopters, you have the chance of making an enormous profit.