Trading opportunities on the currency pair: Since the 20th of September, the British pound has shed around 600 pips against the US dollar. The drop started with a pin bar model. From looking at the cycles, I’m expecting the rate to drop to the TR2 trend line or the range from 1.3000 to 1.3016, followed by a recovery to 1.3350 – 1.3490. We should keep the 21st of October and 29th of November in mind for possible reversal dates. From the trend line, I’ll start trying to trade with the trend with targets of 1.3350 and 1.1390. After the 28th of November, I’m expecting a downwards reversal and a breakout of the TR2 trend line.

The last idea on the GBPUSD currency pair was published on the 29th of May. At the time of writing, one British pound was trading for 1.2805 USD. After the UK’s GDP figures for the first quarter were revised downwards, the pound dropped to 1.2775, breaking through the lower boundary of the A-A channel and the TR trend line. In my forecast, I was expecting the rate to drop to 1.2643 in time for the FOMC meeting (13th - 14th of July). It didn’t happen quite the way I expected, but the rate fell to 1.2635 by the 14th of July. After the FOMC meeting, the bullish trend was restored from 1.2589 with renewed strength. 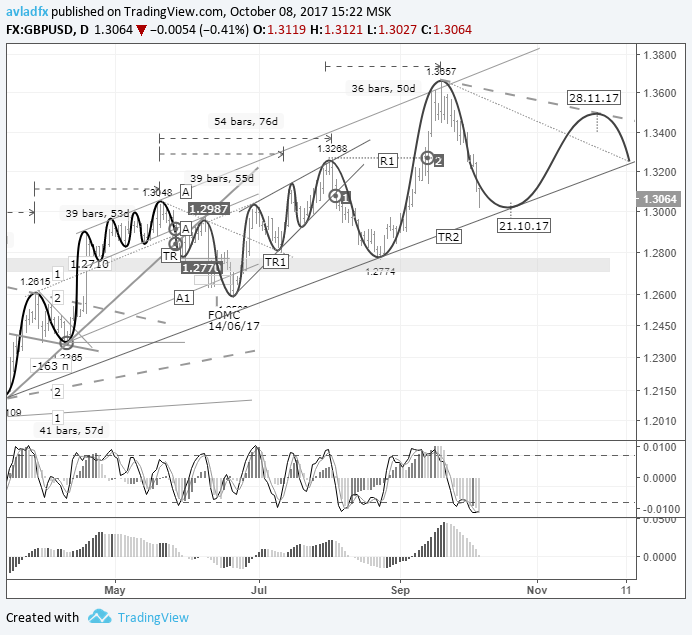 According to the latest COT (Commitments of Traders) report, which was published on Friday by the CFTC, large speculators have cashed in on their long and short positions.

From this latest report, we can see that large speculators have abandoned their long positions on the back of the British pound’s slide (possibly due to stop levels being activated) and have taken profit on the short positions opened during the pair’s rally to 1.3657. Conversely, small speculators increased their long positions during the downwards movement; expecting that the pound would resume its upwards trajectory.

Given the rate at which the pound is dropping; thanks to the bears, the price should get at least as far as 1.2875. If we allow for downwards movement with divergences, it could go as far as 1.2775. I’m waiting for the rate to drop to the trend line, and then I’ll try trading with the trend with targets of 1.3350 and 1.1390.