On Wednesday the 11th of October, trading on the euro/dollar pair closed up. In the European session, the euro appreciated to 1.1845. In the US session, buyers advanced further to 1.1869.

The single currency was boosted by a general weakening of the US dollar and a slide in US bond yields. The euro was also helped as tensions surrounding the Catalonian independence crisis slightly subsided. Catalan leader, Carles Puigdemont, has thus far held off on making an official declaration of independence. Spanish Prime Minister, Mariano Rajoy, has given the Catalan leader 5 days to clarify his position. 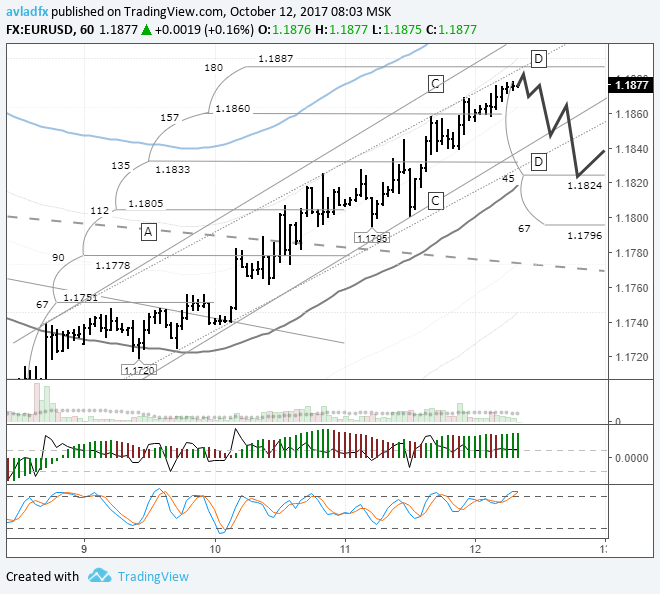 My predictions concerning the euro’s strengthening yesterday came off in full. The euro/dollar pair reached the 1.1860 mark. Today, in Asia, that growth continued to 1.1878. Now the price continues to rise with momentum on its side.

Now, I’d like to bring your attention to two upwards channels; C-C and D-D. Where do they differ from one another? The C-C channel is based on the trend line that runs from the low of 1.1699, while the D-D channel is formed from the tops of the upwards movement. They’ve turned out to have slightly different inclines.

So what do they tell us? The C-C channel gives us some rough targets for growth and for a trend reversal in the event of a breakout of the trend line. The D-D channel shows the levels at which the price may stray from the trend line to mark a false breakout. With the situation as it is, we could see the price drop to 1.1840 before rebounding upwards.

Today, I predict a downwards correction on the euro/dollar to the 45th degree at 1.1824. The price has reached the trend line. The target on the daily timeframe was 1.1880. The right shoulder of the inverse head and shoulders pattern has fully formed. Now sellers have a chance to induce a reversal.

The 45th degree is located below the 2 channels. It’s unlikely that we’ll break out of the C-C channel immediately, but I think that sellers will manage it on the second attempt. The hourly indicators need to unload.