EURUSD: news from the US sinks buyers

On Thursday the 19th of October, trading on the euro/dollar pair closed up. The British pound was not so fortunate. The main reason for the euro’s rise on the crosses was the news from Spain. Mariano Rajoy, the Prime Minister of Spain, announced his government’s intention to impose direct rule on Catalonia after the region’s president, Carles Puigdemont, refused to rule out an official declaration of independence.

The government wants to chair an emergency meeting on Saturday in order to trigger Article 155 of the Spanish Constitution; thereby limiting the authority of the Catalonian government. The euro rate restored to 1.1858 but erased most of these gains this morning following news from the US. 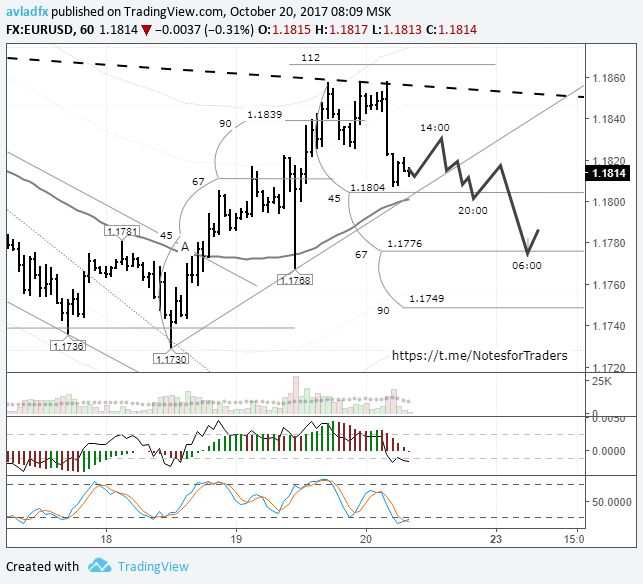 After the euro hit the low target in the forecast, the price returned to 1.1858. As I said above, this was helped by increased demand for the euro on the crosses.

On Friday the 20th of October, the US dollar made gains in Asia on news about tax reform. The US Senate has approved the budget for 2018. This has strengthened the Republican Party’s position on tax reform, as it will allow them to get their proposed tax legislation through the Senate with a simple majority vote.

US 10Y bond yields jumped 1.8% to 2.359% on this news. The dollar followed suit, rising against the majors. The euro rate dropped by 50 pips to 1.1808. The euro’s slide was limited thanks to continued support from the EURJPY, EURCHF, EURAUD, and EURGBP pairs.

On Friday, I’m expecting to see the rate drop to 1.18, while my forecasting model sees it dropping to 1.1776. Due to corrective phases on the cycles, the main drop is expected to happen on Monday.