On Friday the 20th of October, trading on the euro/dollar pair closed down. The dollar launched on attack on all fronts following the news that the US Senate had approved the 2018 budget. The single currency came under added pressure from the uncertainty surrounding Catalonia as well as a slide on the euro/pound cross.

The pound was given a boost against the euro following the announcement from European Council president Donald Tusk that the EU heads of state had approved preparations for the second stage of Brexit negotiations. 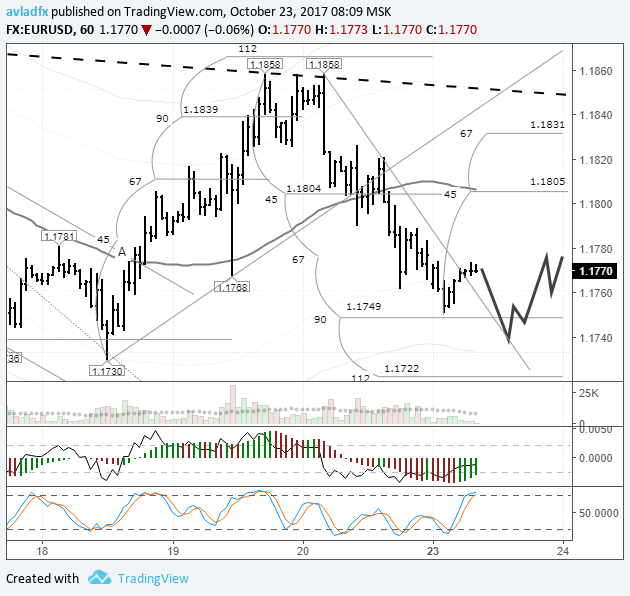 Friday’s expectations of a drop on the euro to the 67th degree came off in full. On Monday, during trading in Asia, the rate dropped to 1.1751. The price’s slide stopped at around the 90th degree. 1.1722 marks a potential reversal level.

Considering that on Friday, the euro fell against the dollar all day, I’m expecting Monday’s candlestick to close up. The Catalonian crisis may deter traders from buying the euro. The Catalonian parliament is expected to announce a meeting date on which to issue a formal declaration of independence.

Since the Stochastic is up, and there aren’t any bullish divergences on the AO (with volume), today’s forecast expects a renewal of the Asian low at 1.1738. If you read the idea on the euro/pound cross, you’ll see that the euro could remain under pressure until the end of November this year.

A flat below 1.1785 would be good for sellers. In order for buyers to bring more bulls into the game, they need to push the price up higher than 1.1823 today. Could this happen on Monday? Yes, it could. Keep an eye on the news in Spain. If Catalonia doesn’t declare independence, the euro will rise across the board.

At the moment, the euro is trading up against just the yen. The yen reacted to Japanese Prime Minister Shinzo Abe’s election victory with a drop.