EURUSD: high volatility expected due to a busy day of economic events

On Monday the 13th of November, trading on the euro/dollar pair closed 11 pips up. The euro dropped during the first half of the day before going on to mount a recovery. The rebound from the low of 1.1637 was partially down to growth on the euro crosses. The biggest mover among these in terms of growth was the euro/pound cross.

The euro bulls took advantage of the pound’s weakness, which came under pressure over developments in the UK. It was revealed that some members of the ruling Conservative Party were preparing a vote of no confidence in Prime Minister Theresa May. The euro, as a result, rose against the dollar to 1.1675 before stabilising around the 1.1665 mark. 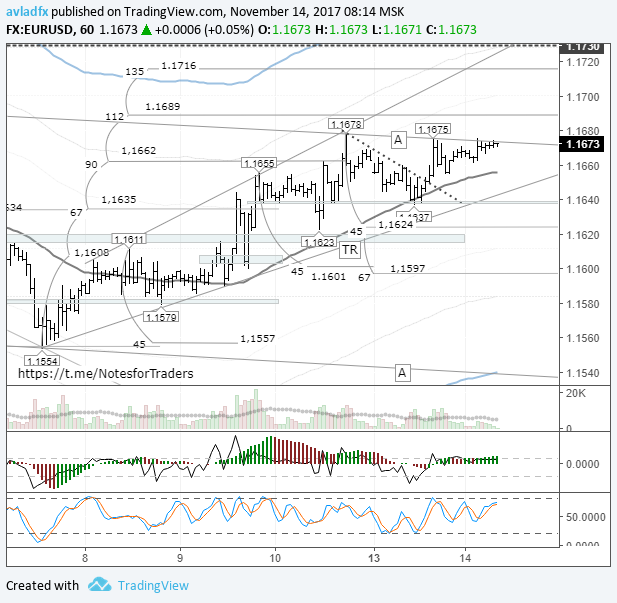 The LB balance line along with the rising crosses held sellers up at 1.1640. By the end of the day, buyers had recovered their losses and ended the day slightly up. With an empty economic calendar, growth was limited. The price stalled as it reached the upper boundary of the A-A channel and entered a correctional phase.

Given the number of economic events scheduled for today, I’m not going to make a forecast as volatility is expected to be high. The most awaited of these events among traders are the preliminary GDP figures from the Eurozone and Germany and well as speeches from the heads of central banks at a conference organised by the ECB in Frankfurt. Among the key speakers are Mario Draghi, Janet Yellen, Haruhiko Kuroda, and Mark Carney.

Yesterday, I gave you a technical view of the euro. According to the pricing model, it’s set to undergo a sharp increase, meaning that it should rise against the dollar to exit the A-A channel. Hourly indicators on the euro index contradict this picture. Today’s news should resolve this conflict.

I’ve decided not to make a forecast given that news items can render any kind of technical signal irrelevant. Moreover, there is a lot of news expected today. To those who have stayed in the market, I wish the best of luck in weathering today’s major developments. To anyone who isn’t currently in the market, I advise remaining on the sidelines for today.