EURUSD: Merkel has failed to form a coalition government

On Friday the 17th of November, trading on the euro/dollar pair closed slightly up. Despite continued pressure on the euro due to difficulties in Germany in forming a coalition government, the single currency was bolstered by a surge in demand following a retreat by traders towards safe haven assets amid new developments concerning North Korea. The euro was also helped by a decline in US bond yields, which brought the dollar down with it. 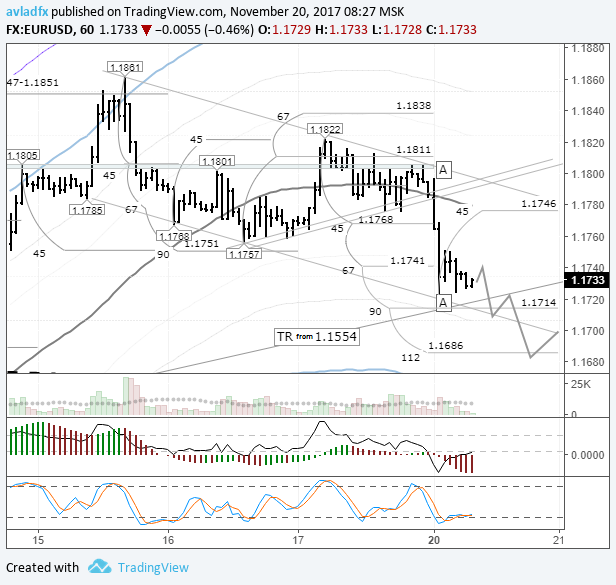 Sellers didn’t make it to the 45th degree on Friday. A support level came into play at the 1.1775 mark which they were unable to break due to increased demand for safe havens. The price closed at 1.1795.

On Monday the 20th of November, trading on the euro opened with a sharp decline. The euro dropped to 1.1722 (-73 pips) after news that talks on creating a coalition government in Germany had broken down. Germany’s Free Democratic Party (FDP) walked out of negotiations after failing to reach a compromise with Angela Merkel’s Christian Democratic Union, its sister party the Christian Social Union, and the Green Party.

At the time of writing, the euro is trading at 1.1735. The price bounced off the lower boundary of the A-A channel and has been trading in a sideways trend for the last few hours. There won’t be many news releases relevant to the euro today, so the deadlock over forming a coalition government will be the main focus throughout the day.

My forecast expects a breakout of the TR trend line, the 90th degree, and the A-A channel, followed by a price drop to 1.1686.