The previous idea on this currency pair was published on the 6th of November after Shinzo Abe’s convincing election victory in Japan. At press time, the price was trading around 132.61. The pair has been caught in a sideways trend for the last few weeks. Given that the central bank left their monetary policy unchanged at the last meeting, my mid-term forecast shows a breakout of the resistance at 134.50, followed by further growth to 141.06 (high from June 2015) in the 1-1 channel. The intermediate targets are 136 and 139.

On Monday the 20th of November, the euro dropped to 131.17. The euro lost ground against the yen after coalition talks in Germany collapsed. By Wednesday, market participants had stopped worrying about the future of the German government as they shifted their focus to US and German data.

You can find the weekly chart with a forecast in the previous review. In this review, I want to look at the EURJPY pair on the 4-hour timeframe. The euro rose significantly against all the majors on Friday, rising 0.8% against the yen to reach 133.24. This growth was catalysed by the US dollar’s decline, weak US data, reduced trading activity due to the US national holiday, and a decline in US bond yields.

The 131.40 – 131.80 range acted as a support. The euro rebounded from this zone and is currently trading around the 133.03 resistance. The coalition talks in Germany are now of secondary importance as in such a thin market, traders have worked up an appetite for more risky assets.

The trend line runs through 134.50 and 133.89 levels. Buyers are currently 50 pips away from it. If we don’t see any renewed pressure on the euro on Monday and buyers break through the trend line, quotes will rise further to 134.50. The immediate target on the weekly timeframe is 136.00. 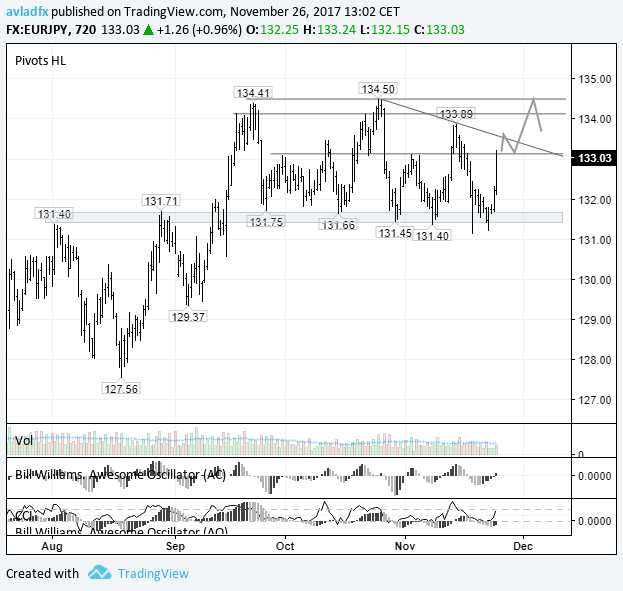