On Wednesday the 29th of November, trading on the euro/dollar pair closed slightly up. Buyers recovered all their intraday losses during the American session after the British pound made some gains. The pound was boosted by the news that the UK had reached a deal with Brussels “in principle” regarding the EU divorce bill.

The euro’s rise was held up by a rise in US bond yields as well as increased caution from traders with the crucial Senate vote on tax reform approaching.

In yesterday’s speech, Fed Chair Janet Yellen said that the strengthening of the US economy would ensure the need for continued interest rate hikes. This speech along with the publication of US data strengthened the dollar, but it had erased all its gains by the end of the day. 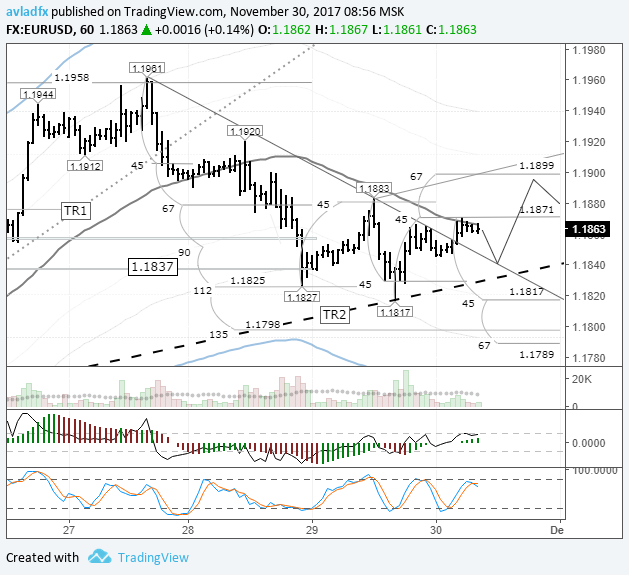 Yesterday’s forecast came off; the target was reached. Sellers made several attempts to break down the trend line, but none were successful.

The euro dropped to 1.1817 due to a decline on the euro/pound cross and a surge for the US dollar. The price didn’t manage to go any lower. The price then rebounded upwards during the Asian session to reach the 45th degree at 1.1871. Since the trend line from 1.1961 has been broken through, today I’m expecting the rate to rise to 1.1895.

The price is currently sitting on the LB balance line (sma – 55). The market is in equilibrium and is ready for a price divergence of /- 0.38%. I don’t think the price will make it to 1.1899 (67 degrees) given that the stochastic oscillator is currently reversing downwards. If the price drops to 1.1845, it won’t have enough time to return to the 67th degree.

If sellers break through the TR2 trend line during their attack, the growth described above will not come to pass. Under the current pricing model, I can’t see the price declining any further should it break down the TR2 line. I think that in such a case we can expect to see a complex formation taking shape.