Trading opportunities on the currency pair: The price is moving according to plan. Buyers have overcome the resistance at 134.50 and reached their intermediate target of 136.00. Now, the road to 139 is open (162% of the 114.85 – 124.08 range). We could see a pullback before the rally recommences. It won’t resume at all, however, if the price exits the 1-1 channel.

The last idea on this currency pair was published on the 6th of November, 2017, with the pair trading at 132.37. At the time, I was expecting the yen to rise against the euro after Shinzo Abe's election victory.

So long as the Bank of Japan maintains their current monetary policy until mid-April this year, I expect to see the yen drop against the euro to 141.06 (high from June 2015). Since my forecast is for the mid-term, I’ve got 136 and 139 as intermediate targets.

At the end of December last year, the pair moved out of the sideways trend to reach the first target of 136, having jumped to 136.64. So, the first target has been reached, the next one is 139.

From the 9th to the 10th of January, the yen appreciated 1.7% against the US dollar to reach 133.02. This growth prompted rumours that the Bank of Japan had reduced its purchases of Japanese 10-to-25-year government bond and 25-to-40-year bonds each by 10bn JPY (88.39m USD). Traders interpreted this as a slight tightening of monetary policy. These rumours were later quashed.

By the end of the week, the pair had recovered to 135.39. Other factors strengthening the euro include the recently published minutes of the ECB’s latest meeting on monetary policy as well as the breakthrough in coalition talks in Germany. This news pushed German bond yields up, bringing the euro along with them. The minutes revealed that the ECB may start curtailing is QE program sooner than planned. 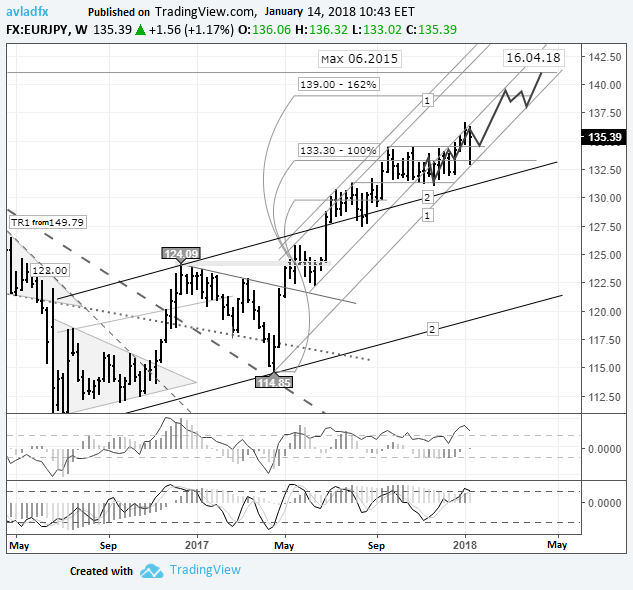