EURUSD: the pair strayed, then returned to the balance line

On Tuesday the 17th of January, trading on the euro/dollar pair closed 3 pips down. The intraday low was 1.2195.

In the European session, the euro dropped after reports from Germany, where the Social Democrats are split on whether or not to join in a coalition government with Angela Merkel’s Christian Democrats. Later, a Reuters report intensified the downwards pressure on the pair. The agency reported that the ECB is unlikely to taper its bond purchasing program at their meeting next week.

During trading in the US, the euro bulls completely recovered their losses. Buyers gradually pushed the price back up to the 1.2240 resistance over the course of 4 hours. As soon as this barrier was overcome, the pair’s growth gathered pace. Traders are once again losing interest in the US dollar. 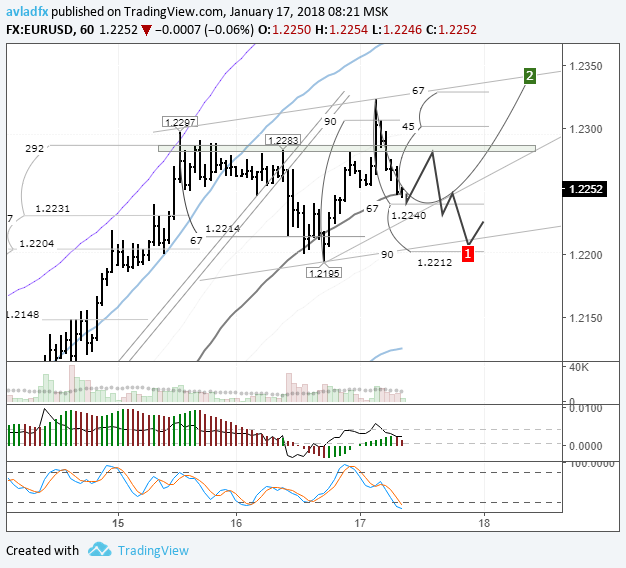 In Asia, the euro has risen by 56 pips to reach 1.2323 in the space of 2 hours. I couldn’t find a reason for shorting the dollar so I’ve laid out 2 possible scenarios on today’s chart.

First of all, the situation in Germany with regards to forming a coalition government has yet to be resolved. Secondly, the euro’s rise is being hindered by the upcoming ECB meeting. Thirdly, a pin bar model is forming on the daily timeframe. If the day closes at 1.2245 or lower, this will create a sell signal.

On the other hand, the trend is bullish. As we can see, despite all the negative news surrounding the euro, a lot of long positions were opened on it as it dropped to the LB balance line, leaving a long shadow on the candlestick behind them. The pin bar isn’t fully formed yet, so this could all go out the window by the end of the day.

So, what’s going to happen?

Scenario 1: continued decline on the euro to the lower boundary of the channel (at 1.2212), strengthening the bearish daily candlestick. If we see drop below 1.2195 on the hourly timeframe, there’s a possibility of a double top forming. The double bearish divergence between the price and the AO indicator works in favour of this scenario.

Scenario 2: price rebound from the 67th degree with subsequent growth to 1.2240.

The European calendar is virtually empty today. The only important report to come out is Eurozone CPI data. Today’s main event is the Bank of Canada’s meeting followed by a press conference with Governor Steven Poloz. Markets are expecting a 25-base-point hike to interest rates. It’s still unclear how markets will react to this.