On Monday the 22nd of January, trading on the euro closed slightly down against its opening price, and slightly up against Friday’s closing price. It was a very volatile day. I still can’t figure out why the market fluctuated so much and what traders were reacting to throughout the day.

Trading on the euro opened at 1.2270 after which sellers closed the gap, correcting the rate to 1.2214. In Europe, the euro restored to 1.2267 before returning to 1.2224. Buyers came into play once again before the end of the day, pushing the price up to 1.2258. In the end it came to 4 separate impulses in one trading day.

The euro received a boost from two news items. The first piece of news was the report from Germany that some significant progress had been made towards forming a coalition government. The second was the news of the US government shutdown over the weekend.

Last night, the Senate voted to extend government funding, bringing the shutdown to an end. 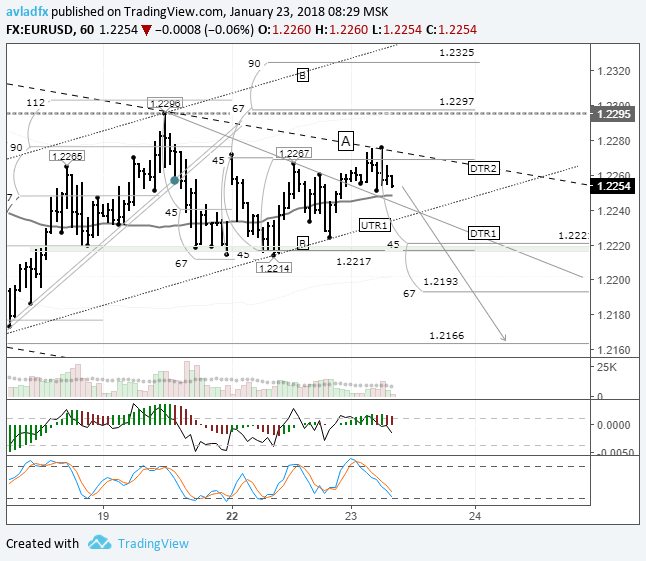 Due to fundamental factors, trading on Monday was very volatile. My expectations of a decline for the euro didn’t come to pass. At the time of writing this review, the euro is trading at 1.2269 around the balance line (sma 55).

I’m not going to make a prediction for today, although I expect the euro, on the whole, to decline over the next few days. The only thing I’ll say is that it’s possible that short positions won’t survive for long enough to see the drop.

From the top of 1.2323, a triangle has formed. The waves aren’t ideal, but you could fit them into an a-b-c-d-e pattern. It could also turn into a narrowing triangle, in which case the price will exit downwards below 1.22.

The US House of Representatives has taken a short-term measure to keep the government funded until the 8th of February. Nevertheless, the dollar is in no hurry to appreciate. At the moment, it’s trading up against a lot of the majors.

The euro crosses, except for EURJPY, are providing support to euro bulls during today’s Asian session. There’s one thing bothering me about this situation. Buyers aren’t afraid of the upcoming ECB meeting and Mario Draghi’s subsequent press conference. Either they know something about Mario’s speech that we don’t, or they’re simply confident of the greenback’s further decline.

Last week, it was reported both by Reuters and Bloomberg that there wouldn’t be any changes to monetary policy at the ECB meeting on the 25th of January. Officials aren’t particularly fazed by the euro’s current upwards trajectory, but this does bring some ambiguity into the equation. Traders will once again be looking out for hints in Draghi’s rhetoric as to whether the bank’s stimulus programs could be curtailed.