On Friday the 25th of May, trading on the EURUSD pair closed down. The single currency’s decline was brought about by political tensions both in Italy and Spain as well as the greenback’s broad ascent, which happened in spite of a decline in US10Y bond yields. Bond yields went down to 2.925%, while the euro dropped against the dollar to 1.1646. 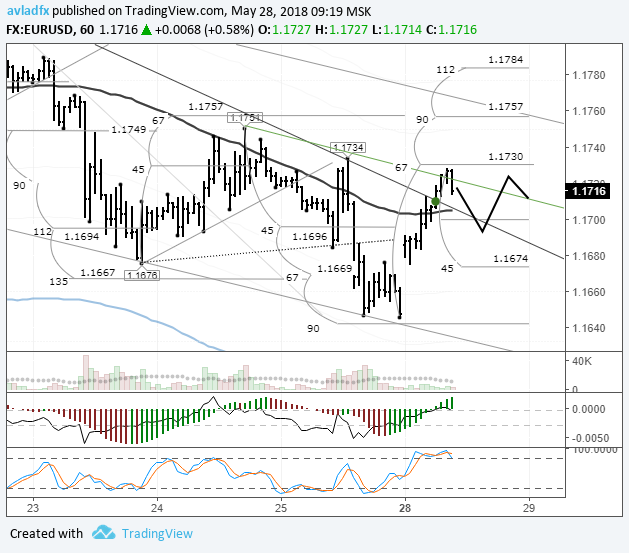 On Friday, the euro dropped against the dollar to reach 1.1646. Trading closed at around the 90th degree. Trading on Monday opened with a sharp increase. The rate recovered 80 pips to reach 1.1726. As such, buyers have recovered all of Friday’s losses.

As the geopolitical risks from Italy and Spain remain, traders have responded to the Italian president’s decision to veto the potential coalition’s choice for Finance Minister by buying euros.

Italian president Sergio Mattarella, having vetoed the choice for Finance Minister, prompted the resignation of the proposed Prime Minister, Giuseppe Conte. The country remains without a government. A decision on holding early elections is set to be made by authorities this week.

It could be, however, that traders were reacting to the news that preparations for the summit between Donald Trump and Kim Jong Un are going ahead. This is because the yen, franc, and gold are all trading down.

US President Donald Trump tweeted on Sunday evening that a team of delegates from the US has arrived in North Korea to make arrangements for his meeting with North Korean leader Kim Jong Un.

At the time of writing this review, the euro is trading at 1.1713 against the dollar. Markets are closed today across the US and UK. Because of this, I’m expecting low market activity from traders until Tuesday.

The bearish trend remains strong, but I’m holding off on shorting the euro until the 30th of May as that’s when the hourly patterns and cycles point towards an upwards correction for the euro.