EURUSD: euro bulls at a loss over uncertainty in Italy and Spain

On Wednesday the 30th of May, trading on the EURUSD pair closed up. On the back of some correctional movement on the US dollar, the single currency managed to return to 1.1647, after which a new wave of sales began. After reaching 1.1595, the rate shot up to 1.1676.

A change in trader sentiment on the market was brought about by a report from Reuters. The news agency reported that the leader of the 5-Star Movement had called for Paolo Savona to withdraw his candidacy for the post of Finance Minister so that a compromise might be found and a government formed. He suggested that Savona could remain in government, but in a different ministry. 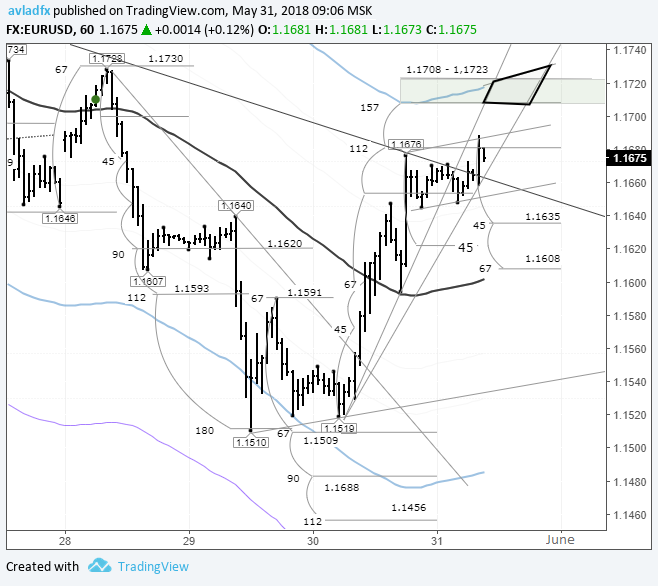 From 1.1619, our pair recovered to the trend line. The zone beyond the trend line has been strengthened by the 112th degree (1.1660). Sales from 1.1655 were closed by way of a stop level. Overnight, trading on our pair settled at around 1.1660, but today, the stop level didn’t fit into market fluctuations after the breakout of the trend line. Positions were opened on the assumption that prices would rebound from the trend line given that, aside from Italy, there is also a downside risk for the euro coming from Spain. The Spanish parliament will hold a vote of confidence in Prime Minister Rajoy. This could go against him, which would only increase uncertainty.

Buying euros during such a crucial development is risky. If you’re considering shorting instead, better to go from the U3 MA line (1.1717). If the hourly candlestick closes below 1.1660, this would confirm the breakout as false. If this happens, I advise keeping an eye on the support zone of 1.1645 – 1.1650, because a breakout here would return control to the bears and the target of 1.1550 will come back into play.