BTCUSD: breakout of the trend line

On Thursday the 6th of July, trading on bitcoin closed 0.85% down. It spent most of its time consolidating around 6,606 USD.

Trading in the US opened down. There was no real appetite for bitcoin among Americans following Independence Day. The crowd was split into two camps. There was an active struggle around the trend line at 6,560 USD, where buyers were forced to retreat. The rate then dropped to 6,429 USD as a result of the breakout of the trend line. Sellers then went on the attack after the closing of the European session.

If 6,400 falls to the bears, this will mark the beginning of a new phase of decline for bitcoin. The lower boundary of the A-A channel will be the last front from which the bulls may be able to revive the rally.

Look at how after the price rebounded from 6,675, the market recreated the pattern from the 18th of 22nd of June. If sellers are active today, they could bring the rate back as far as 6,150 without too much difficulty. On the other hand, inactivity on their part will strengthen the position of buyers.

I’ve made a template for reference. I’m always looking for similar patterns in the price history with high positive correlations to give me an idea of how the crowd will react in certain situations. If you can find a pattern that repeats itself 3 times, you know what to expect from the market in the future. If fundamentals don’t get in the way, the price will move as expected.

The stochastic is in the sell zone for BTC. Decline could set in at any moment. Otherwise, the price will remain at its current level until trading opens in Europe. 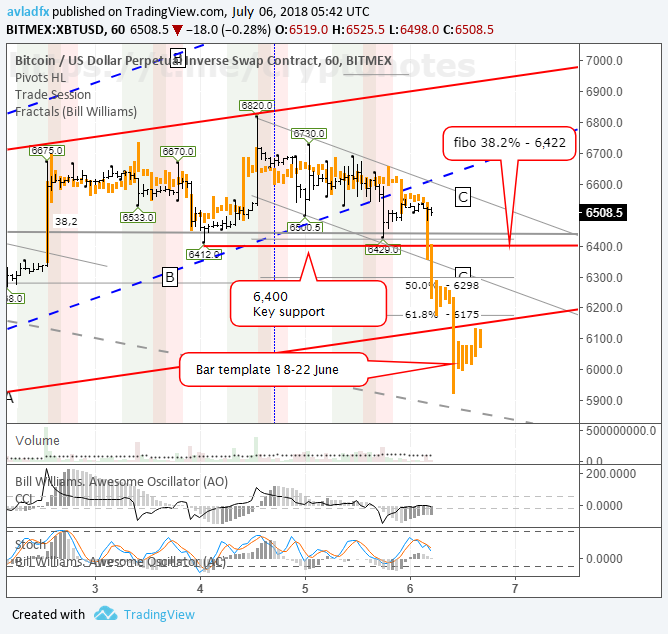