On Thursday the 12th of July, trading on the euro closed up by 2 pips. The candlestick was closed to form a doji due to price fluctuations. Sharp movements were observed during the US session following the release of US inflation data. Market players were cleaned out as the euro soared to 1.1696. Before the release of the US data, the ECB published the minutes of its latest meeting, which put pressure on the euro. As a result, we first observed a drop to 1.1650, and then a rise to 1.1690, followed by a return to 1.1666. 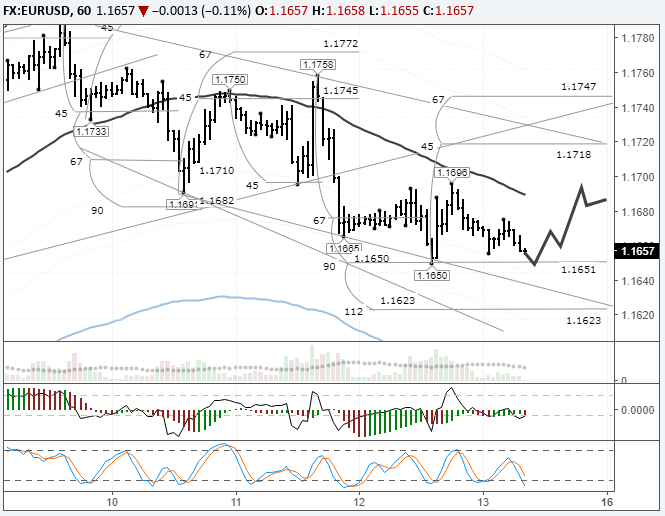 We reached our forecasted target yesterday. It was very difficult in the morning to predict what would happen after the release of US inflation data. The fall from 1.1758 amounted to 90 degrees. The pair found support at 1.1650. If you look at the technical picture, I see a rebound to 1.1700 from the current level. At the moment, I am concerned about an escalation of the trade conflict between the US and China.

China has published data on its trade balance for June. The surplus amounted to 41.6bn USD against the forecasted 27.72bn USD (previous: 24.92bn USD). Meanwhile, the US deficit increased. Thus, in the near future we can expect new aggressive statements by Donald Trump and the further escalation of the trade conflict between the two countries.

The dollar is trading in positive territory against all currencies. If the pressure on the euro increases, then the earliest we could expect to see a rebound is 1.1625.