This morning, in the run-up to the opening of the European session, EURUSD is trading at around 1.16875, in other words, almost at the same level as yesterday morning. As I wrote earlier, I do not expect any big changes in the major currency pairs before the ECB monetary policy meeting, the results of which will be published tomorrow at 16:30 (GMT 3).

However, looking at the fundamentals, the potential for pressure on the euro by the dollar is increasing. According to IHS Markit reports for the European and American economy for July, which were published yesterday at 11:00 (GMT 3) and 16:45 (GMT 3) respectively, the Eurozone GDP growth rates will continue to lag behind the US GDP growth rate in the near future. IHS Markit forecasts that in the third quarter of 2018, the Eurozone's GDP growth will be approximately only 0.4% in quarterly terms, and the US GDP - 0.7% QoQ.

Therefore, I suppose that if tomorrow the ECB does not present any surprises, then very soon the  pressure on the euro by the dollar will be felt, and the EURUSD pair will slowly go south.

Today it would be a good idea to pay attention to the following macroeconomic data:

On the hourly timeframe (H1), EURUSD has been trying to recover from the potential downwards trend since yesterday: 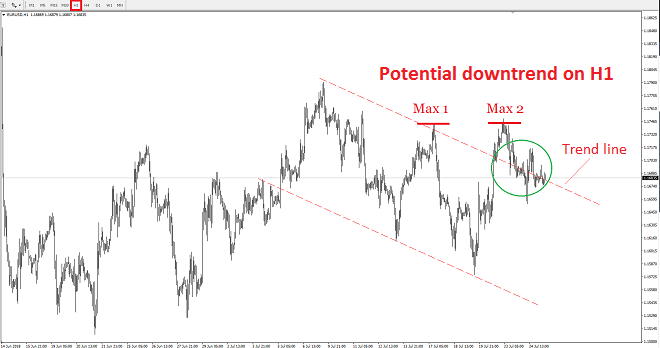 The chart shows that the EURUSD pair has lately been fluctuating near the trend line (green circle on the chart).

I would wait for the ECB meeting to wrap up and after that, if the ECB does not change its rhetoric on monetary policy, I would consider, in all likeliness, shorting the EURUSD pair.