According to the H4 chart, the GBPUSD pair continues to find itself in a downwards trend: 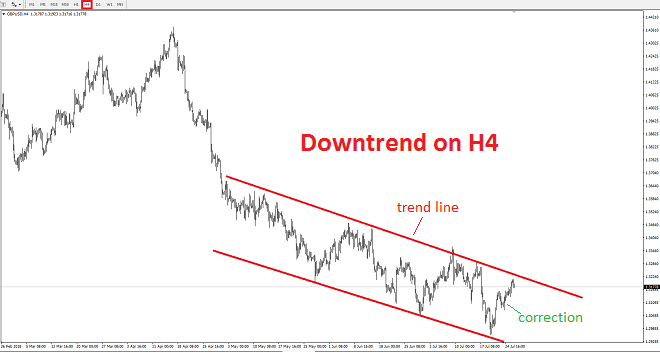 The chart shows that the pair is currently testing the trend line. In other words, the GBPUSD pair is going through a correctional phase within the downwards trend.

I reckon that the EURUSD pair is going to play a major role in the dynamics of GBPUSD in the coming days, because there is often a well-defined correlation between the movements of the two pairs. Remember that the results of the ECB meeting come out at 14:45 (GMT 3), with the subsequent press conference starting at 15:30 (GMT 3). As such, I think that the GBPUSD pair will take its cue from EURUSD.

However, the correlation between the GBPUSD and EURUSD pairs may start to weaken at the beginning of next week, because the Bank of England’s next meeting on monetary policy is taking place on Thursday the 2nd of August. Because of this, market participants trading on the pound will already have the meeting in mind from the beginning of the week, so whatever effect today’s ECB meeting has on the pound will start to subside at that point.

Returning to the chart, I’d like to emphasise that in my opinion, it will most likely become clear whether or not the downwards trend can be revived once the BoE meeting has concluded.

At the time of writing, the GBPUSD pair is trading at the 1.3177 mark.