EURUSD: risks have risen through the hour-long trend line

On Friday the 3rd of August, trading on the euro closed down. High volatility was observed in light of the publication of the the US labour market report.

July data on the number of those employed in the non-agricultural sector of the US did not meet market expectations. Although the data was below 189 thousand, the report is not bad, as the average hourly salary has grown and the indicators for May and June have been revised upwards. US 10-year bond yields fell on news of the report, with many major currencies closing in positive territory on Friday as a result.

The number of new jobs was 157 thousand (forecast: 189 thousand). May figures were revised from 244 thousand to 268 thousand, and in June - from 213 thousand to 248 thousand. The overall revision amounted to 59 thousand.

The unemployment level fell to 3.9% (previous: 4.0), which coincided with expectations. 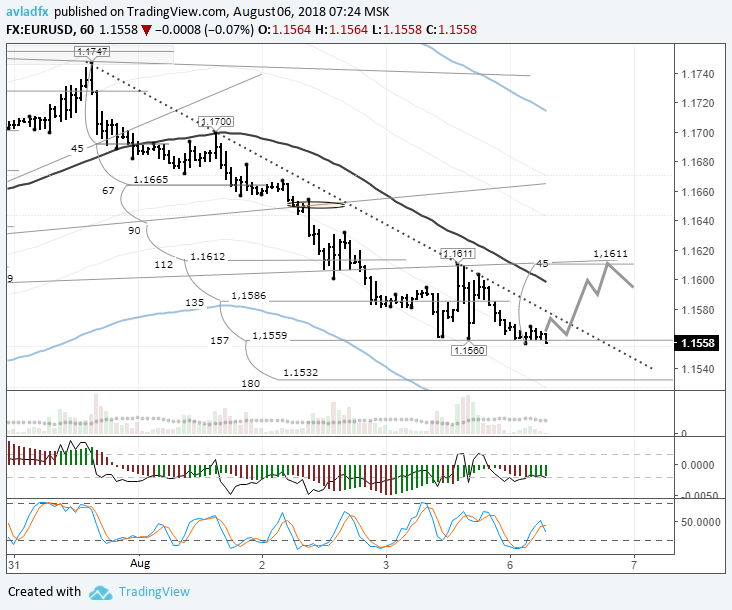 Friday's multidirectional fluctuations once again confirm that it's pointless to make market forecasts on payrolls day. The 157th degree acted as a support. The price bounced off that area three times and now sellers are trying to test it below 1.1550.

I see the pair is poised to rebound to 45 degrees (1.1558). The Stochastic Oscillator isn't favouring buyers at the moment, so it will only be safe to enter long positions if the trend line gets broken. The balance line (Lb) will act as an intermediate resistance. Now it is passing through 1.1600. The economic calendar is looking pretty scarce. There's nothing to stop buyers from inducing a correction.