Trading opportunities on the currency pair: There’s a familiar pattern on the weekly timeframe, by which we could see the Kiwi dollar start an upwards correction after the RBNZ meeting. If prices reverse along the same trajectory as the previous drop, the immediate target will then be 0.6990. This outcome is still on the cards as long as the pair is trading above 0.6660.

The NZDUSD pair has been in a sideways trend with a range of 171 pips for 5 weeks. What’s caught my attention at the moment is that the downwards movement starting from 0.7437 is similar to the drop starting from 0.7558. These waves are almost identical, and considering that the pair is trading around the lower line of the 2-2 channel, there’s a high risk of an upwards reversal, as we saw in December 2017.

Another important thing to note is that on the weekly timeframe, minima are formed on a cycle of 20 – 29 weeks. We’ve now passed the 29-week mark, so the situation temporarily favours the bulls. Considering that a bullish divergence has appeared on the AO indicator (second window), when it crosses the zero line, the column’s colour will change to dark grey, a sign of a strengthening Kiwi dollar.

The US dollar had a mixed day against the majors on Friday. The Kiwi dollar shed 0.33% or 23 pips to reach 0.6743. July’s NFP report didn’t meet market expectations, although thanks to a rise in average hourly earnings and the upwards revision for May and June’s readings, the report was received reasonably well.

157k new jobs were created in July (forecast: 189k). The reading for May was revised from 244k to 268k, and June’s was revised from 213k to 248k. The unemployment rate dropped from 4.0% to 3.9%, which perfectly matched expectations. US10Y bond yields reacted to these statistics with a drop, which led to a lot of the major currencies to close the day down.

On Thursday the 9th of August, the Reserve Bank of New Zealand will make a decision on interest rates. The regulator is expected to leave its current monetary policy unchanged. After the meeting, or even ahead of the decision, we might see the beginning of an upwards correction for the Kiwi on the weekly timeframe. NZD has been in a weak position relative to the dollar for 34 weeks. 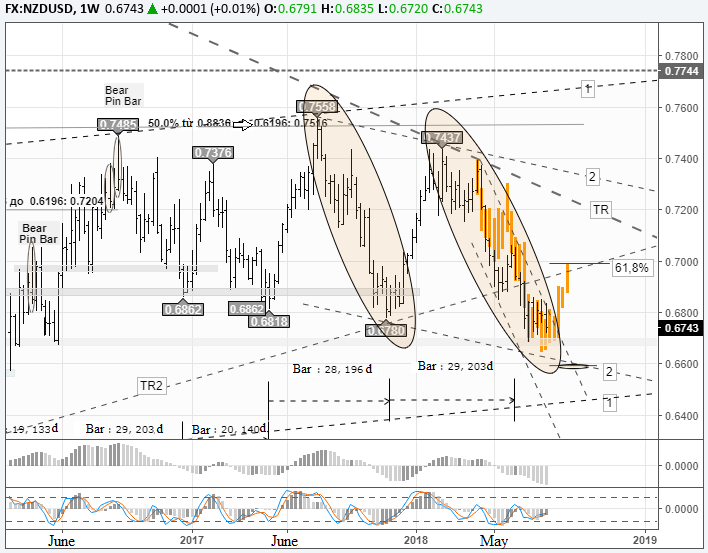 The RBNZ meeting is one of this week’s key events. The Kiwi dollar is in a weak position against its US counterpart, so I think it’s ok to keep your short positions open on this pair.