EURUSD: the trend line is broken, and the bullish phase has begun

The euro began trading in the new week down, dropping in the US session to 1.1530. The pressure on the single currency came from the general strengthening of the US dollar against the backdrop of an empty economic calendar.

The escalating trade conflict between the US and China also added to the uncertainty. Chinese authorities announced plans to impose customs duties on US exports to the tune of 60bn USD. Moreover, US 10-year Treasury bonds fell from 2.96% to 2.924%.

When profitability decreases amid political turmoil, it exerts weekly pressure on other major currencies, rather than on the dollar. By the close of the European session, buyers recovered all losses, raising the rate to 1.1570. 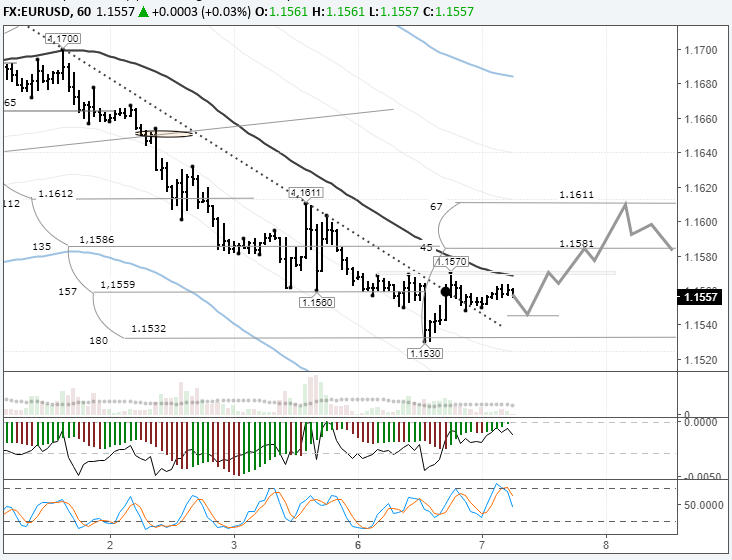 The euro fell to the 180th degree against the backdrop of a drop in US10Y Treasury yields, as well as a general strengthening of the US dollar. Before the close of the European session, the price was under the trend line, so all purchases were risky. After the breakdown of the trend line, according to the forecast, I expect the euro to strengthen against the dollar from 1.1545/50 to 67 degrees (1.1611) by 16:00 (GMT 3). On the crosses the picture is mixed, with the main cross, the euro/pound pair, trading in positive territory.

If the market proceeds based on my trajectory, then you can zero in on 1.1670. The price increase should be regarded as a correction to the downward movement. Important economic data in the second half of the day is not coming out.