EURUSD: correction to the balance line

On Monday the 13th of August, trading on the euro closed slightly up. Markets took a breather after a sharp drop which started on Friday due to increased tensions between The US and Turkey as well as the fact that Trump ordered the doubling of tariffs on Turkish metal.

The Turkish crisis first started affecting developing markets and has gone on from there to impact the developed world. The US dollar and Japanese yen have been the safe haven assets of choice. The EURUSD pair dropped to 1.1365. In Monday’s European session, the EURUSD rate rose to 1.1433. 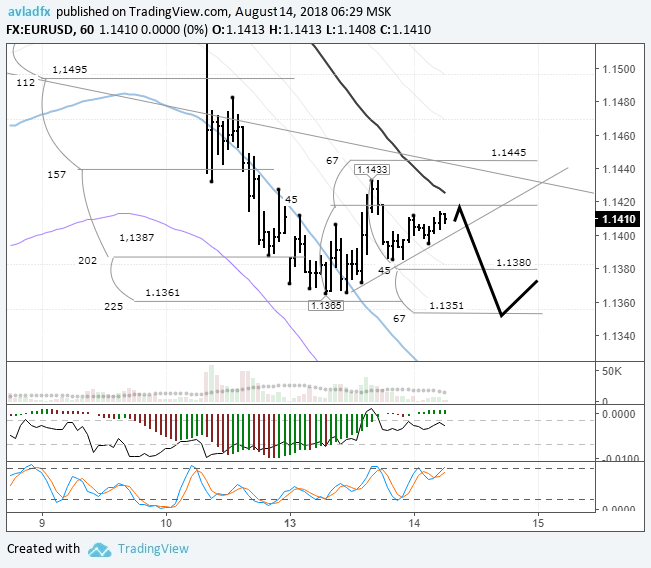 Since the USDTRY pair is consolidating at around 6.90 USD, the EURUSD pair recovered from the 225th degree to 1.1433 as part of a correction. The rate returned to the LB balance line (sma 55). While the market is currently in equilibrium, prices may deviate from this line. The lira isn’t getting any stronger, so the correction could come to an end as the European session gets underway. Stay alert.

Trading on the dollar is mixed in today’s Asian session. The euro crosses are in negative territory. Considering that an important support has been broken on the weekly timeframe, after a pullback, the first target levels for sellers will be 1.1380 (45 degrees) and 1.1351 (67 degrees).

At 12:00, Eurozone GDP and industrial production figures will be released. At the same time, a ZEW survey on economic sentiment for both Germany and the Eurozone will be published. These are important indicators, so expect a surge in volatility around this time on all pairs involving the euro. If volatility does rise, this should last for about 30 – 40 minutes.