On Friday the 31st of August, trading on the euro closed down. The single currency corrected to 1.1690 against the dollar during the European session, which became the intraday high. From there, the pair tanked to hit 1.1585.

Ahead of the long weekend in the US and Canada, the US dollar made significant gains on the back of increased uncertainty over international trade between the US, Europe, Canada, and China. A retreat towards the safe havens began after reports that representatives from the US and Canada expressed doubts on Friday over reaching a free trade agreement.

Pressure on the single currency then subsided after Donald Trump threatened to take the US out of the World Trade Organisation and impose tariffs on another 200bn USD of Chinese goods. 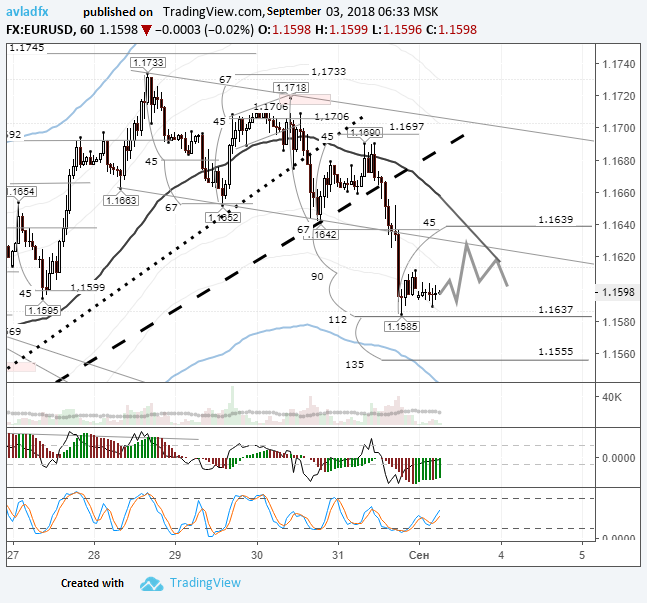 After breaking the trend line at 1.1665, the euro dropped to 1.1585. The drop was stopped at the 112th degree, after which a correctional phase began, which is still taking place now.

The euro crosses are all trading up except for EURJPY. The uncertainty over international trade between the US, Europe, China, and Canada continues to exert downwards pressure on our main currency against the yen. When traders start averting risk, the single currency comes under immediate pressure.

Considering that the US and Canada have national holidays today and that the European economic calendar is empty, I’m going to risk saying that trading in today’s European session will counter Friday’s movements, i.e. the euro will rise.

The 45th degree passes through 1.1639. I reckon that growth will be limited to around 1.1625. I’m not expecting a strong rebound since we’re witnessing a retreat towards safe havens in the Asian session. We can expect increased volatility in the European session.