EURUSD: correction could continue through to Thursday

On Monday the 3rd of September, trading on the euro closed slightly up. Exchanges were closed in the US and Canada due to national holidays. This of course meant that activity was low during the US session. As trading closed in Europe, the euro had recovered to 1.1628.

The single currency also got some support against the greenback thanks to growth on the EURGBP cross. The pound declined following comments from EU representative Barnier that he is strongly opposed to British Prime Minister Theresa May’s latest proposals concerning Brexit. Michel Barnier is the EU’s top representative in post-Brexit trade negotiations with the UK. 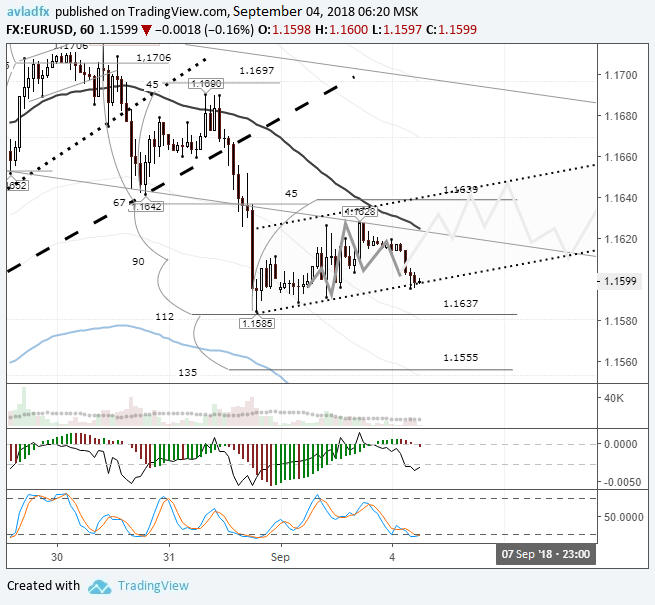 Everything turned out exactly as I expected yesterday. Bulls were met with resistance at around 1.1628. The pair didn’t make it to the 45th degree and the LB balance line (sma 55).

After publishing my review yesterday, I extended my forecast to the end of the week. I haven’t bothered adjusting it today since the rate hasn’t strayed from it by much. I’m going to keep my forecast for the week on the chart until Monday to see how accurate it is.

In Tuesday’s Asian session, the pair has returned to the lower boundary of the channel formed from the correction which started at 1.1585. From a technical standpoint, on the hourly timeframe it looks like the bears have their sights on 1.1555. I don’t mind if this happens, but hourly cycles and patterns suggest that the correction will continue through till Thursday. The market doesn’t owe anything to anyone, these are just calculations. There are resistance levels at the 45th degree (1.1639) and the LB line (1.1623).