US stocks in green after a disappointing close last week

The US stock market ended the week lower yet again on the news of the US-China trade dispute and the spill-over effect from Europe, where the markets have been under pressure following Italy's budget announcement, thus disappointing EU officials as it could add pressure to the already large debt exposure of a key country of the Eurozone.

The Fed, as expected, added 25bp to its benchmark rate which is now at the highest level in 10 years. Last week’s pressure on equities is not to be linked to the FED hike though, as so far, such hikes have been made on continuing the strength of the economy, both at the macro-economic and corporate level, and have followed a predictable path. 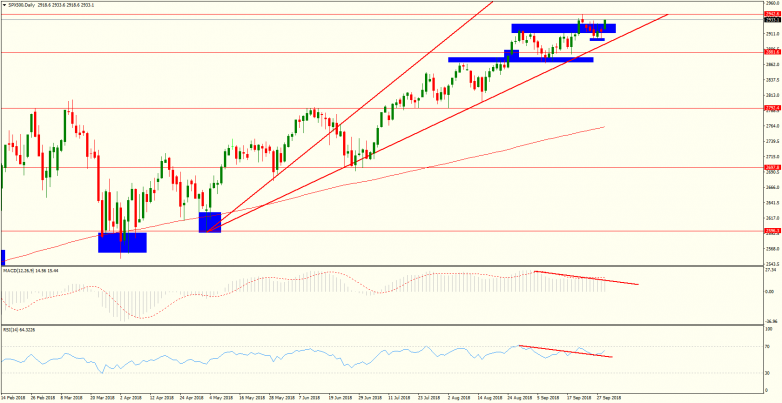 The chart shows last week’s decline repeatedly testing the 2,900 – 2,902 range,  which we spotted last week as an important price mark. The week is starting out on the right foot for bulls, as the US market is reacting to a rebound in Europe where the Italian FTSE MIB is up 1.12%, thus spelling relief for all European indices which closed up in Asia.

The index is rapidly approaching its highs, marking higher lows, and 2,940 might be reached within the first session of the trading week if the situation in Europe holds, following the attempts by Italian officials to reassure their EU partners of their commitment to maintaining focus on debt sustainability notwithstanding the aggressive budget announced last week. Actually, the problem is not the deficit spending announced in the range of 2.4%. The EU rules cap the GDP/spending ratio to 3%. The problem is how are these resources used: will they be used to boost the economy, productivity, the growth of the entire system, or will they be spent just to fulfil electoral promises, actually wasting the potential economic benefits of running a deficit?

Anyway, in this situation, we need to be patient. A long trade would be viable in the event of a breakout of the high at 2,945, while the potential for a short position can be seen below 2,900, and a break below the closest dynamic support as shown on the chart.

The situation on the NASDAQ index could support a long view on US equities: 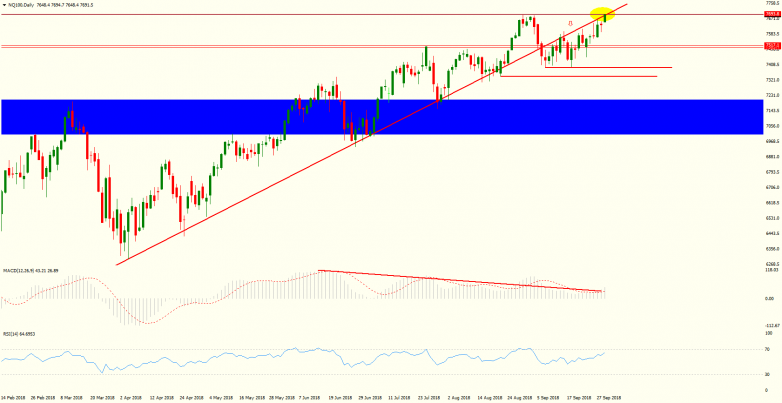 The aggressive short trade that we hypothesized last week is ticks away from its natural stop over the index highs which are being tested at the time of writing, together with the dynamic support which was broken at the beginning of September.

Again, since we're seeing higher lows, in the event of a break above, the highs might confirm the positive market sentiment for this week and justify a long view which could be extended to US equity markets as a whole. We must consider that the situation is fluid and that there are many factors that could derail a bullish view. To the delicate situation in Europe, we have to add the pressure on emerging markets, especially in Asia, where the effect of the trade wars between the US and China are hitting all economies in the area and their currencies, forcing central banks to take aggressive action.

In an effort to slow the decline of their currencies and keep inflation under control, the central banks of Indonesia and the Philippines have both raised their interest rate, adding 25bp and 50bp respectively, and further hikes are likely to be needed in the near future.

Going back to Europe, our call on a possible short around 12,400 has been helped by the Italian budget announcement, which drove the index as low as 12,180: 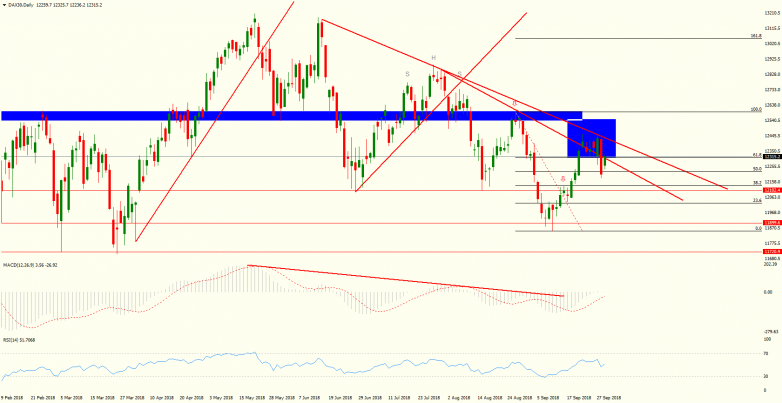 The market opened with a gap up regaining roughly half of the deep drop marked on Friday last week. That is a strong reaction but not enough to change our mind on this short trade. The stop will need to remain above the highs marked on Thursday.

The temptation to bring profit home is strong, as a confirmation of the positive mood on the US market could wipe out the opening profit, but we need to keep a risk-to-reward ratio that makes sense as professional traders, and cutting profits as soon as we see some green is completely wrong. We need to consider that in the situation we described, higher volatility is a natural consequence and trades need breathing space, given that we took increased volatility under consideration in sizing our position, so as to keep risk under control.

The way we make trade decisions and manage our trades was highlighted on a trade we proposed via twitter in real time (remember when I wrote that it is a pretty good idea to follow us on our @ApariRA twitter account?) and that is still open.

As you might remember, we were in a long position on the EURUSD cross, and we had a nice amount of pips in profit. Then, with the Italian budget announcement and all the difficulties Italian officials were having in reaching a deal, we looked at the chart again, and spotted an opportunity: the break below the short-term dynamic support on the daily chart and what seemed to be an intraday successful test. A short opportunity was spotted, with a possible target to 1.1630 and beyond. If we see this situation, the long must be closed, taking into consideration fundamental reasons which seem to be confirmed by technical analysis, and we entered a trade which, given the tight stop above the day’s highs, had a great risk-to-reward ratio. Here was the first chart we posted: 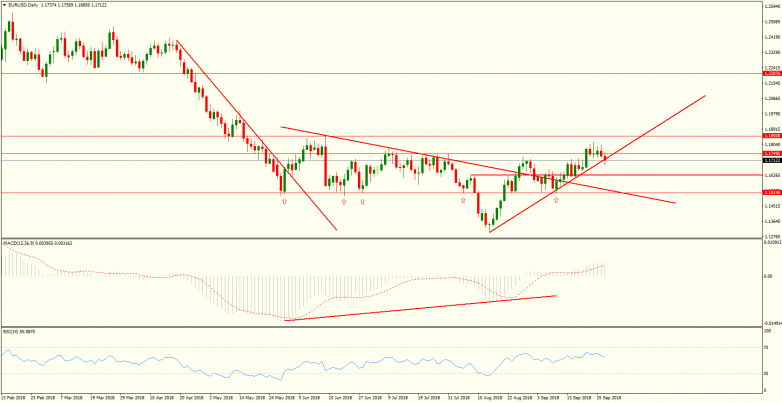 “Here we are. First target at 1.1630 tested during the night and prices are trying to go further down. OK. Follow the plan. Close half position. Stop to BE. With the other half we target the area in the chart and continue monitoring to lower the stop." 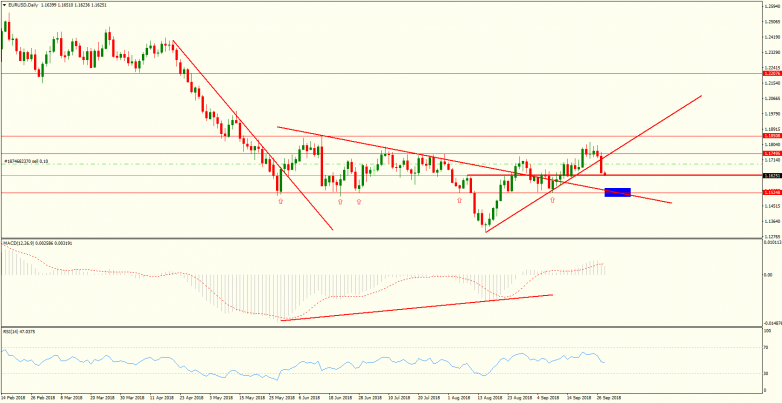 In the tweet we posted few minutes ago: “Following up on last week's tweets, our trade is still in place. Same target area, stop lowered @ 1.1655, securing profits. That is above the previous day high and clearly a stall point on H4. Should $EURUSD go below, 1.1570 SL to 1.1620.” Here is the chart: 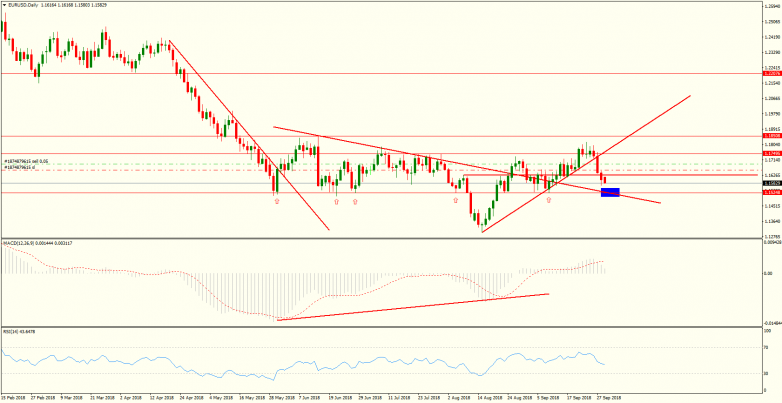 Last week we took a look at Brent, as the OPEC meeting was due last week. OPEC claimed that the supply is adequate for the present situation and called for better compliance on production quotas, which gave prices the strength to move above the wide resistance area and break the 80 USD level: 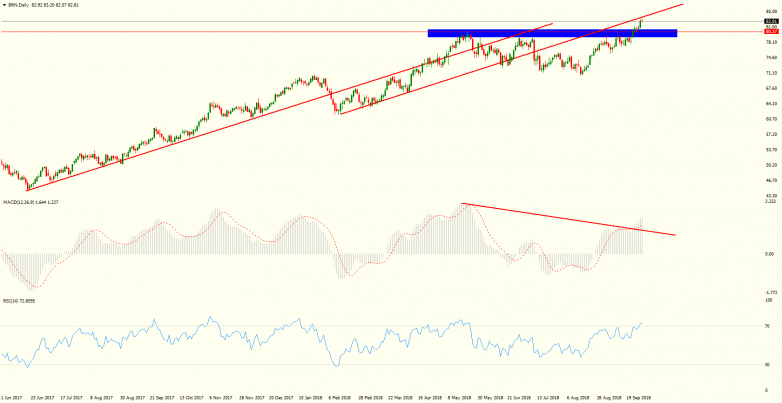 The price is now testing the closest previous dynamic support and could stall a bit below there, moving towards a test of 81 if a strong rebound on the stock markets in Europe and the US are not confirmed by the close of trading today.

Looking to the longer term, the situation is still a bit bullish for oil as the increase in shale oil production is unlikely to balance the lack of increase in production by OPEC countries, and considering the diminished output from Iran and Venezuela. Furthermore, the JMMC (joint Opec-Non-Opec Committee) did not recommend an increase of oil output, thus adding pressure on the oil price to the upside.

This week investors will focus on the US non-farm payrolls, average hourly earnings, the unemployment rate and trade balance data, with the latter being particularly interesting to check on the impact of China's retaliatory tariffs on US trade so far.

We also have an interest rate decision in Australia and unemployment data in Canada.

As always, brace for volatility around this important market news and size your position properly.