EURUSD: impulsive trading on the euro

On Tuesday the 9th of October, trading on the euro closed 5 pips down against the dollar. During the European session, the single currency dropped to 1.1432. The bulls recovered their losses in the US session, pushing the rate up to 1.1503. This upwards impulse was brought about by a renewed decline on the greenback, which occurred in response to a drop in US10Y bond yields.

News from the UK continued to exert an influence the Forex market. Officials announced that the EU and UK have made progress in negotiating the terms of exit. Trade terms could be finalised as early as Monday (15th of October). 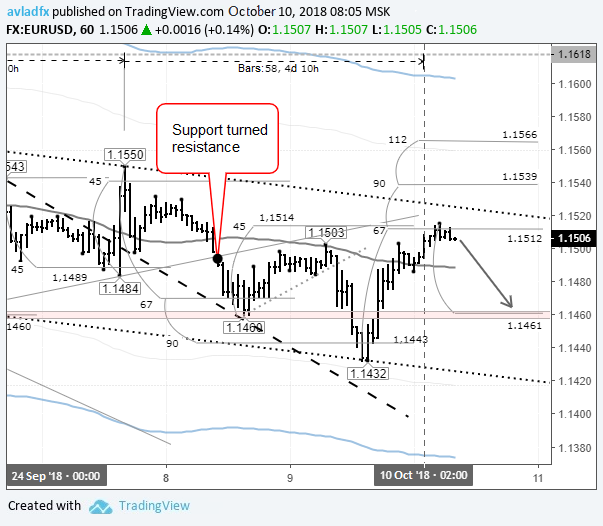 The sharp recovery from 1.1432 has led to the formation of a long-legged doji on the daily timeframe. Despite this bullish signal, the pair could revisit the 45th degree at 1.1461 before rising.

Traders are mostly looking at the difference between German and Italian bonds. If the spread widens, this will give the bulls cause for concern. Aside from the Italian problem, markets will also be keeping a close eye on Brexit negotiations.

In short, any negative news concerning Brexit negotiations or the Italian budget will trigger a selloff of euros. The drop stopped around the trend line. I reckon that if the pair makes a move towards 1.16, it’ll be via a rebound from 1.1461.