Week deep in red for US and global stock markets

Trade tensions between the US and China seem to have played a major role once again, with pressure added by the IMF (International Monetary Fund), who revised their growth estimates downwards for 2018 and 2019. Moreover, we have started witnessing a few profit warnings being announced. Is the stimulus induced by the corporate tax cuts losing momentum?

It’s bad news for the upcoming earnings season and therefore for stock markets, which have so far safely sailed through all kinds of bad news amid the strong data regarding both labour and corporate earnings. 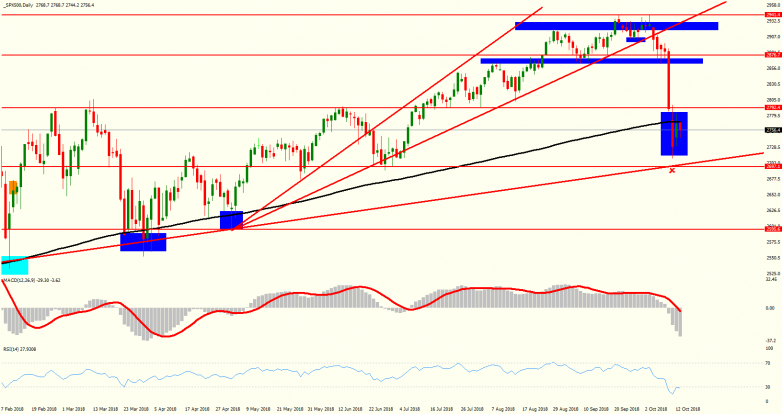 Could our call to hold onto our short trade be more effective?

Time to manage the trade and lower the stop loss to around the 2,805 area, and follow the price that today or tomorrow could reach the target area on the very important dynamic support, which might ignite a bounce.

Such a reaction is even more probable given that the daily chart shows a breakout below the 200-day simple moving average; a very important technical level that is monitored by every investor to plan their medium-to-long-term moves. The moving average has managed to reject the decline several times since the major drop in February, and a relief bounce off the dynamic support to check on the strength of the technical level makes a lot of sense, especially if good news hits the market.

Therefore, if the price approaches the dynamic support, it would be a good idea to take home some profits by closing half of the open short position.

What about NASDAQ? Our short worked wonders again: 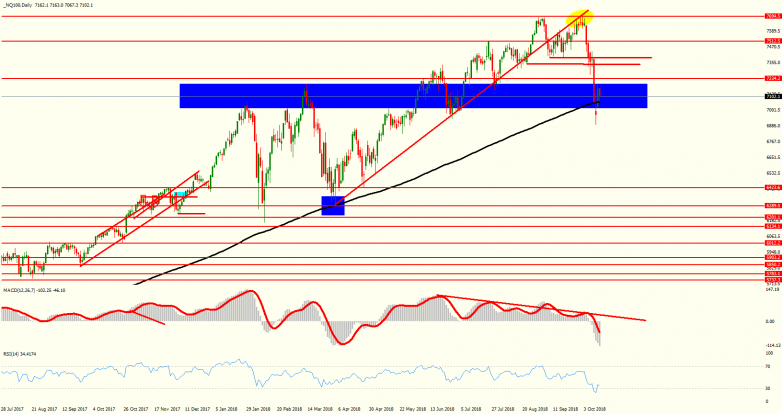 This time, the target of 7,000 was reached during Thursday last week.

The same money management rules apply: close half the position and move the stop loss to around 7,250. Here again, the 200-day simple moving average is under attack by the bears, and what we can consider a wide daily doji is providing a bit of relief.

Given the setups and trades in place on these two indices, we can just sit back and relax. In this situation, what we will be doing is just lowering the stop further in the event of any further drops. In any case, we are definitely bringing home some nice profits!

On the other side of the ocean, the spill-over effect of the drop on US stocks and surge in Treasury bond yields has piled on the pressure. This has been further added to by the tensions between the EU and Italy on the Italian draft budget, which EU officials do not like, as in their view, it poses a threat to the sustainability of the country’s finances and consequently on its huge debt-to-GDP ratio. Another big event is looming; the Brexit Summit, during which decisive steps forward on an exit deal are necessary given the rapidly-approaching deadline.

Furthermore, elections were scheduled for the weekend in a very important German region: Bavaria. A bad result was expected for the coalition led by Chancellor Angela Merkel, and that was not good news for the EU, given that Mrs. Merkel is one of the advocates of the EU’s status quo in all its forms, including border policies.
And it is exactly this issue that led to a very disappointing result in the election in Bavaria for Merkel’s party (the CDU), despite their efforts to show a tougher stance on immigration.

All of the above put a great deal of pressure on the DAX index, on which our aggressive short trade survived the stop two weeks ago, vindicating the strict stick-to-the-plan view we had last week. Another home run for us here! Here is the chart: 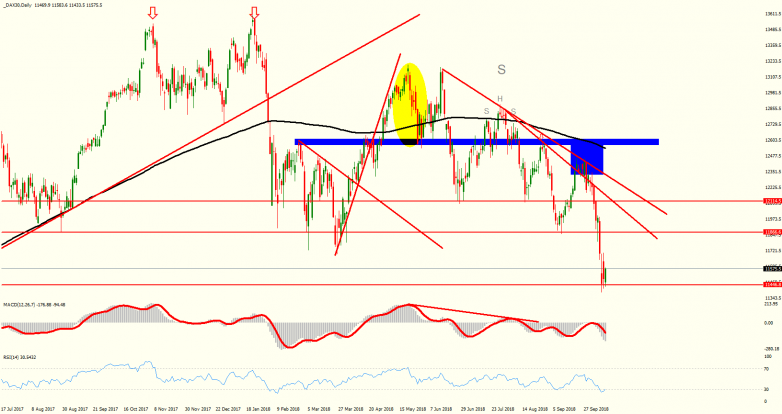 The bearish movement extended well beyond 11,870, which we mentioned last week, with an unimpeded decline all the way to the support at 11,450.

Again, this is the place to take some profit home, closing half of the position, but I wouldn’t lower the stop as much as in the other cases, positioning it just above 12,200, which would grant us only around 100 pips of profit on the remaining half of the trade.

Why is that? Do we want to risk giving back all those pips? Does it make sense?

My opinion is that: yes, it makes a lot of sense!

Let’s just look at a bigger picture on the chart, decreasing the zoom to look at the wider picture: 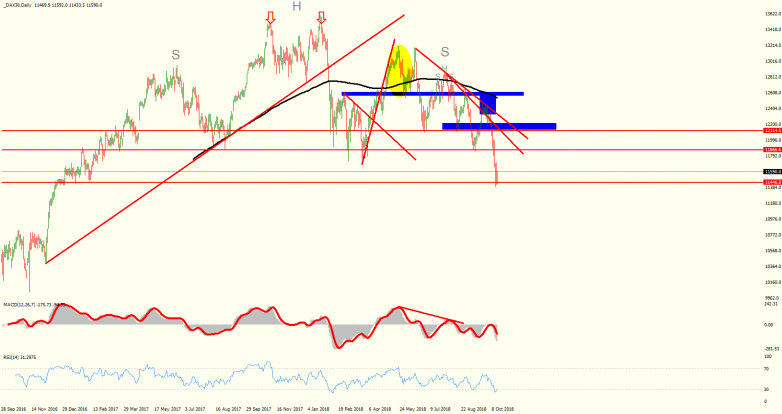 Here we can see a very wide Head & Shoulders formation, whose neckline is at 12,110!

Now, we brought home hundreds of points on half of the position we held for three weeks, and we could bring home a few more if a sharp reversal takes our stop level at 12,200.

But if the wide Head & Shoulders formation gets confirmed by market forces, this is potentially one of those home runs that make trend-following and graphical analysis worth it!

In terms of risk-to-reward ratio, this situation is one of the best examples I could give you. We followed the situation both from a technical and fundamental point of view, and we managed our position regardless of short-term noise.

And yes, we were a few pips from being stopped out. A bit of luck always helps, but in the long run, it’s discipline that wins!

So, I will keep up with this attitude and I wholeheartedly advise you to do the same; always keeping risk under control and never falling in the trap of overconfidence, which is always there waiting for us when we have a marvellous winning streak as we’ve had over the last few weeks of trading, which we shared with you in our articles and newsletters.

The European single currency did not deliver the signal we were waiting for to go short: 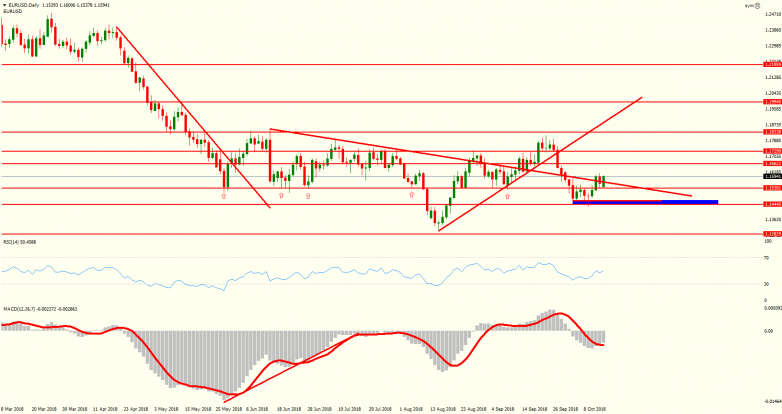 The price didn’t manage to break below the short-term support level, and on an attempt to do so, a morning star formed, prompting a relief bounce which extended to 1.16, a level which is being tested again at the time of writing.

Such a movement might reveal that institutional investors are thinking of a possible compromise on the Italian budget, which could trigger a comeback for the bulls on the EURUSD. We would consider a long trade above 1.16, but with 1/3 of the position size we usually use and a wide stop below 1.1440 given the possible impact of the upcoming news on the Italian and Brexit issues. 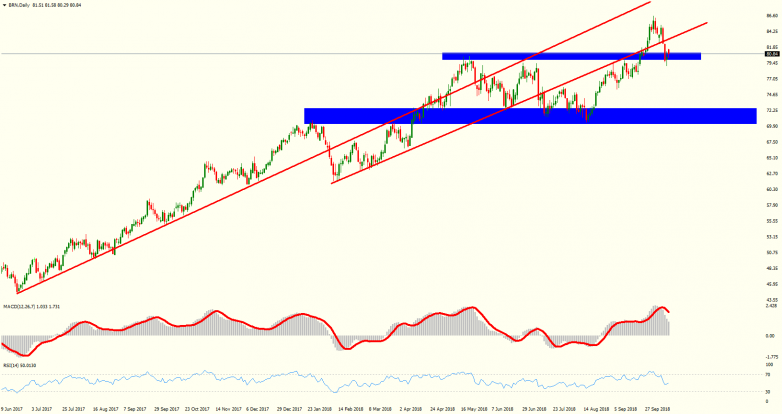 On the break below the dynamic support, as per our expectations last week, the bearish move extended to test the support area before stalling.

We did not go short on this, and we will wait for a break below this area to do so, targeting the wide support area at around 70 USD, which will provide a much better risk-to-reward ratio on the trade.

This week, we already mentioned the Italian Budget deadline and the Brexit summit as possible high-impact situations. We also have GDP data coming out in China. This is an important indicator on the possible impact of trade wars, but personally I think it too soon to see the real consequence of such conflicts as the momentum of the previous strength will still sustain the upcoming data. Other news items to watch out for are the unemployment rate in Australia and the ZEW surveys for Germany and the Eurozone.