ECB President Mario Draghi's press conference was the key event on Thursday. Following the meeting, the governing council of the ECB decided to leave interest rates in the Eurozone unchanged. The refinancing rate remained at 0.00%. The decision coincided with the market forecast, so there was no noticeable reaction to it.

At the beginning of ECB President Draghi's press conference, the euro rose to 1.1433. From there, it fell 77 pips to 1.1356. Draghi thus collapsed the euro with his statement. He said that the ECB will not act as a mediator in resolving the problems plaguing Italy.

Why did the market respond to this statement by selling the euro? The fact is that if the ECB does not intervene in a timely manner, then because of the growth in Italian government bond yields, large banks will find themselves in a difficult situation. 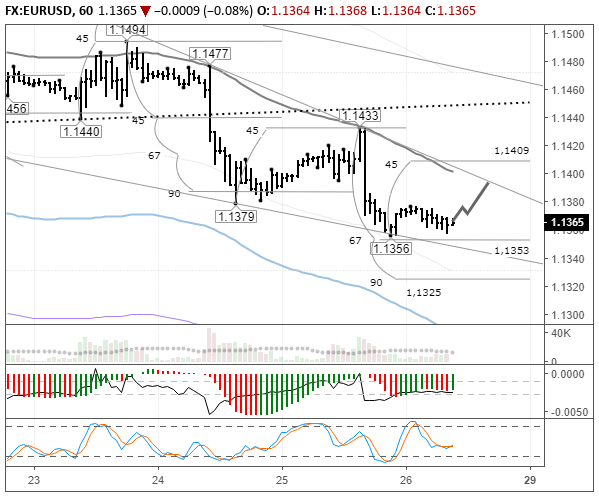 The price rebounded from the LB balance line on Wednesday and Thursday, during the press conference. The 67th degree acted as a support for buyers, and a resistance for sellers. Now the price is in the corrective phase. Considering that a bullish divergence formed between the price and the AO, according to the forecast, I expect the price to return to the LB balance line. The forecast was made before the US session. And it is not yet known how stock indices will behave before the weekend.

Today is Friday, so without negative news from Italy, buyers will be able to raise the rate to 1.1409 as part of the correction. If the week closes before 1.14, the weekly breakout of the trend line will be fixed. Growth to 1.1440 will fix the reversal of the downward movement.