On Monday the 21st of January, trading on the EURUSD pair closed slightly up. The pair slid to 1.1357 during the European session, before partially recovering the day’s losses in the US session on account of the country’s national holiday. The bears have been dominating the market since breaking through 1.1514 on the 11th of January. Over the last few days, the bulls have failed to make their presence known during the rebounds. 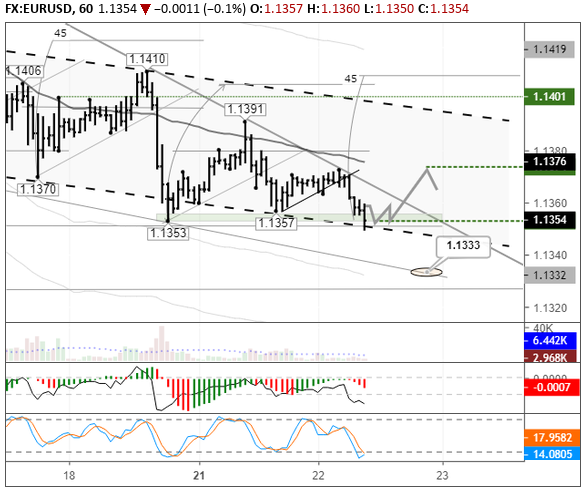 In today’s Asian session, the euro has again turned south after the rebound to reach a session low of 1.1346. Thus doesn’t mean that the pair has found a level from which to rebound. Nevertheless, a rebound from 1.1346 would help the pair to recover to 1.1375.

The ECB meeting and US-China trade talks are the centre of attention among traders. They will also be keeping an eye on the headlines in the UK.

British Prime Minister Theresa May has not ruled out the possibility of exiting the EU without a deal. She has promised to be more flexible in discussing a withdrawal agreement, while rejecting the idea of a second referendum.

On the one hand, I’d like to see the euro drop to 1.13133, although the patterns and cycles point towards a reversal after the low is revisited, which has now happened. The pair is trading very close to the trend line, so I’d rather watch the market from the sidelines. The stochastic is down, which tells us that it’s about time for an upwards correction.